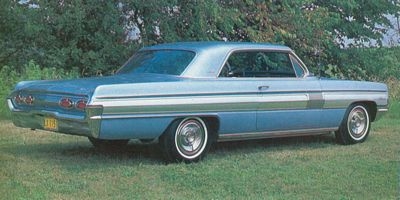 The 1962 Starfire coupe featured a creased roof with a smallish backlight to give it the flavor of a ragtop.
©2007 Publications International, Ltd.

Along with the exterior restyling, the 1962 Oldsmobile Starfire's exclusive V-8 turned out an additional 15 HP -- 345 from the same 394 cubic in. as the previous year. For 1962 it featured a new combustion chamber shape and a slightly higher 10.5:1 compression ratio.

The exterior styling treatment centered on an expanded brushed-aluminum side trim package. The standard equipment list was as impressive as previous model years. Sticker price on the new coupe started at $4,131, actually $50 less expensive than the Ninety-Eight Sports Coupe. The Starfire convertible remained the most expensive car in the Olds lineup at $4,744.

The sales slide for the Starfire began in 1963. For the second consecutive year both a coupe and convertible were offered, but production dropped to 25,549, and only 4,401 of those were convertibles. Competition for sales came from within and outside the division.

The $600-cheaper Pontiac Grand Prix outsold the Starfire by an almost three to one margin, even without the extra sales appeal of a convertible. The first-year Buick Riviera almost doubled Starfire production totals, and the Thunderbird outdid it by two-and-a-half to one.

For 1963, the Starfire continued to roll on the 123-in. wheelbase it shared with the Dynamic 88 and Super 88 models. Power came from the 345-HP Rocket V-8. In addition to standard equipment in previous models, the 1963 convertible's standard equipment list included a power driver's seat and electric window lifts.

Styling, of course, received the mandatory annual revision. Although the Starfire continued to feature brushed-aluminum side trim, the sheetmetal was new, and so were the grille and taillights. The main attraction on the Starfire coupe was the addition of a concave rear window that blended well with the hardtop roofline and looked quite similar to the backlight on the Grand Prix.

Its slide continued into 1964, Thunderbird, Riviera, and Grand Prix represented the outside enemy, while other enticing Oldsmobile models sang a "Siren's Song" from across the showroom floor. For the first time since the J-2 package of 1957 to 1958, Olds offered a basically solid performance option.

Additional competition for the Oldsmobile sales dollar came from the new Jetstar 88 and Jetstar I models, the former bowing as the least expensive full-size Oldsmobile series. The latter served as the sportiest model in the Dynamic 88 series. Like the Starfire, it featured a concave rear window and the big V-8. It undercut the Starfire hardtop coupe by over $500.

Once again, the 394-cubic-in. Starfire Rocket V-8 was rated as Oldsmobile's highest output engine at 345 HP. The convertible added power windows and seat as before. A couple of popular options fitted to many Starfires this year were T-87, a new cornering light package for $34, and N-33, the Tilt-away steering column for $43.

Was Oldsmobile able to stop the sliding sales figures? Turn to the next page and find out.

One novel feature on the 1964 Starfire was a functional Corvette-inspired lower body air outlet. It served the engine compartment and was located directly behind the front wheel openings. It added visual interest to the sides, which no longer wore brushed-aluminum trim.