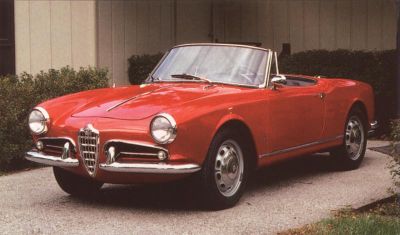 Those who desired a Giulietta with something extra opted for the Veloce model, with its lightweight body panels and dual carburetors. This one is from 1962.

At its birth in 1954, the Alfa Romeo Giulietta was given a "750" series number, which denoted the coupes, convertibles, and sedans with a 1290cc engine and four-speed transmission. The lightweight, high-performance Veloce models retained this number, though it had many specific components that did not interchange with those fitted to normal Sprint coupes and Spider convertibles.

During 1959, a new model, designated "101," was announced. At this time, the Spider's wheelbase was lengthened and a few cosmetic changes were made to the exterior: Convertibles adopted nonopening door vent windows, coupes added a fine egg-crate texture to the center and side grilles, and both gained larger tail-lights.

The ignition key slot was at the far left of the dash in this 1962 Veloce.

But the important modification centered around the engine and four-speed transmission. The former switched to a diecast cylinder block in place of the original sandcast component; the latter was housed in a new case first used for a five-speed in the Scaglione-designed Sprint Speciale that debuted two years earlier. Five-speed gearboxes seen today in 101-series Giuliettas are either transplants or -- less likely but possible -- period conversions made with a factory-offered kit.

The 750- and 101-series cars have a substantial number of unique parts that do not interchange. But the differing parts numbers don't tell the whole story: The shift from 750 to 101 production was, as were many other changes to the Giulietta line, gradual, with new items added as stocks of old parts were depleted. As a result, some late 750s and early 101s may not adhere strictly to the official specifications -- no surprise to anyone familiar with Italian cars.

Another change, this one even more significant, occurred in 1962 when a 1570cc engine was introduced and the five-speed was adopted across the board. The new powerplant was taller, so a broad bulge was added to the hood of the low-slung Spider. At this point, the cars became Giulias -- the Giulietta name was dropped -- but they remained in the 101 series.

The adoption of a bigger engine and a five-speed transmission ushered in the Giulia, "big sister" to the Giulietta. Pictured is a 1963 model.

Learn about the pluses and minuses of these cars in our final section.