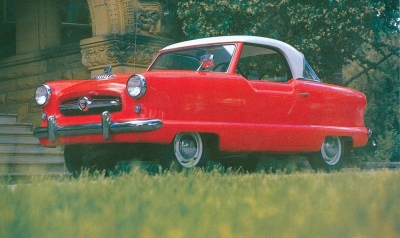 This Canyon Red coupe shows off the indent below the side windows.
none

Sales of the tiny two-seat compact were up and down heading into the 1956 Metropolitan model year.

Despite its flaws, the 1954 Metropolitan got off to a good sales start. Though early 1950s Nash president George Mason had announced first-year production of 10,000 units, deliveries exceeded that goal by nearly a third as Nash shipped 13,162 to the United States and Canada during 1954.

And since production had actually gotten underway in late 1953, some 743 units had been shipped to North America that year. (Since the Met had been specifically tailored for North America, it was not initially sold in its country of origin.)

But one problem with "niche" vehicles is that demand for them tends be satisfied relatively soon, and the Met ran true to form in 1955. In a year when almost every Detroit product sold better than ever, Metropolitan shipments plunged nearly 54 percent, to 6,096 units.

In response, the new American Motors issued a facelifted Metropolitan in April 1956, with suitable grille medallions depending on whether a car was destined for a Nash or Hudson showroom (despite the 1954 merger, those franchises were still nominally separate). The revised Series 56 1500 (the original Met was officially Series 54) incorporated a number of welcome improvements.

Not least of these was substitution of the Austin A-50 engine, whose 0.3-inch larger bore upped displacement to 1,500 cubic centimeters (90.9 cubic inches) and horsepower to 52. This 24 percent increase was enough to lower 0-60-mph sprints from the high to low 20-second range.

To cope with the increased power, a larger eight-inch-diameter clutch was specified, as was a different transmission. There was also a longer-striding final drive ratio, 4.22 versus 4.625:1, which contributed to quieter operation and probably longer engine life as well. Fuel consumption stayed about the same, ranging from 25 to 35 miles per U.S. gallon.

Freshening the Met's appearance were a new mesh grille somewhat akin to the 1955 Rambler's and a hood devoid of scoop. Flashy bodyside two-toning also debuted on both models, delineated by stainless-steel moldings shaped like a stretched letter Z -- a look that was clearly borrowed from the 1955 Willys. Prices eased up, but only by some five percent.

The changes were all very modest but had the desired effect -- sales picked up. Shipments rose to 9,068 units for 1956, then to 15,317 for 1957, by which time the Met's circular grille badge bore a stylized "M" instead of a Nash and Hudson logo. This was done because AMC was shedding those marques.

Met historian David J. Austin estimates that before the change some 15,644 Mets had received Nash nameplates, while 4,356 had been badged as Hudsons.

The rest of the run, through 1962, is detailed on the next page.