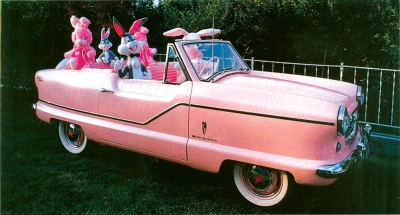 This cute little Metropolitan was modified to duplicate the 1960 Fifth Avenue parade car.
none

Thousands line New York City's famed Fifth Avenue to watch the Easter Parade each year. Had you been among the crowd on April 17, 1960, you would have seen a tiny but colorful convertible, the Metropolitan Fifth Avenue, filled with giant plush bunnies.

It wasn't an illusion. It was the ultimate Metropolitan, fresh from its premier showing the previous day.

It was more than faintly outrageous: 15 coats of hand-rubbed pearl-pink lacquer outside, pink-and-white cowhide upholstery, and pink fur carpeting inside. Even if its manufacturer hadn't been giving away a huge stuffed Easter bunny every hour, the Fifth Avenue would have attracted loads of attention.

Which was precisely the point, because it was part of an American Motors promotional venture, one of three Metropolitan convertibles specially outfitted by AMC's styling department. The others, the "Westerner" and the "Cape Cod," were dolled up to match their names.

There was also an even more special edition, the "Royal Runabout," a handsome black-and-gold one-off built for and presented to Britain's Princess Margaret.

Former AMC public relations manager John Conde recalls that the Fifth Avenue -- and its cargo of bunnies -- spent the rest of 1960 as a featured attraction at autos shows coast-to-coast. It was later sold to a Boston-area AMC dealer, then just seemed to disappear.

Screen star Ann Sothern reportedly purchased it, but that story appears apocryphal. The car's whereabouts are still unknown, but it's hard to imagine it being deliberately destroyed.

Actually, just the opposite happened. Despite a missing subject, one Bob Leach, an apple grower in Zillah, Washington, was moved to build a replica of the Fifth Avenue some years later. (His wife even made a group of outsize pink bunnies.)

The task was no more difficult than it had been for AMC -- except that the factory hadn't taken a single color photograph of the original (also hard to imagine). Evidently no one else had either (not so tough to fathom). But Leach went ahead anyway, relying on descriptions from Conde and others familiar with the project.

Somehow, he managed to duplicate the opalescent pink paint. That was confirmed by a call from James Watson, one-time Metropolitan sales manager. After seeing some color photos of the replica, Watson reported that to the best of his recollection, Leach had matched the original shade exactly.

The New York Fifth Avenue was built near the end of the Metropolitan's brief life. A pity they didn't think of theme models sooner. Imagine the floor traffic such cuties would have generated for AMC dealers -- even without those bunnies.

Learn about the 1956 Metropolitan by continuing on to the next page.