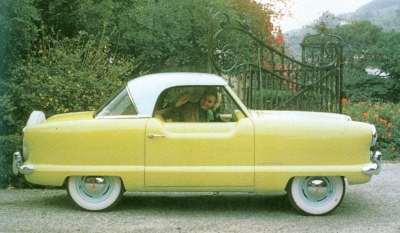 This early 1954 is badged NKI Custom, in reference to one of the car's prototypes.
none

As Nash-Kelvinator president George Mason was considering cars that would lead to the 1954-1962 Metropolitan, independent stylist Bill Flajole had developed a proposal for a diminutive two-passenger car that he was peddling around Detroit. He failed to stir much interest until he went to Nash-Kelvinator, where Mason sat up and took notice. So did his assistant, George Romney.

Nash nevertheless approached the idea with all due caution, perhaps because Flajole's car was as small as the fast-failing Crosley.

First, a running prototype was constructed around the chassis and 500-cubic-centimeter engine from the little Italian-built Fiat Topolino (mouse). The result, dubbed NXI for Nash Experimental International, was sent on a cross-country tour in 1950 and paraded before specially invited audiences in key cities.

Romney was on hand at each stop to gauge reaction. Altogether, some 235,000 people saw the NXI, and no less than 90 percent said they liked it.

Still, these tryouts prompted a number of modifications to Flajole's design.

The tiny Fiat engine, for example, was judged totally inadequate for American speeds and driving conditions. The prototype's buckets hadn't played well, many people saying they'd prefer a bench seat (presumably to permit three-abreast travel, tight though that would be). And the bumpers not only seemed excessively bulky for the car but were downright ugly.

But the NXI's largely favorable reception led Mason to okay additional prototypes with a larger, more powerful engine, nicer styling, and various other changes under the code name NKI -- for Nash-Kelvinator International. More showings followed, and again the response was positive.

That was all Mason needed to forge ahead with the little low-cost runabout. It looked like just the ticket for dashing around congested urban areas, which suggested a perfect name: Metropolitan. And so it became -- although not at first.

From the start, it was clear that the only way to get the Met to market at a reasonable price was to build it in Europe, since tooling costs on this side of the Atlantic would be prohibitive.

England then dominated the U.S. import-car scene (the war-ravaged Japanese auto industry was still too young to be taken seriously). Mason had the Nash-Healey experience under his belt, so to England he went, concluding contracts with two firms by late 1952.

Fisher and Ludlow, Limited, of Birmingham was signed to build bodies for shipment to Austin Motor Company, Limited, at Longbridge, which would install engines and other mechanical components and would also attend to final assembly. Helped substantially by a recent devaluation of the British pound, the tooling bill was held to an incredibly low $800,000.

Learn about the 1954 Metropolitan, derived from those prototypes, by continuing to the next page.