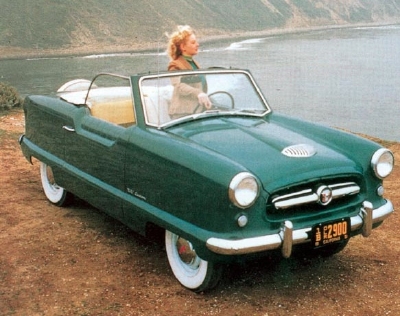 The Metropolitan went into production in October 1953 and made it to the U.S. as a 1954 model.
none

If you had visited George Mason's country estate in northern Michigan during the late 1940s or early '50s, you'd have seen the remains of a number of small cars, mute evidence of what was on the Nash-Kelvinator president's mind as he drew up the 1954-1962 Metropolitan.

European imports for the most part, they'd been literally driven into the ground by Mason himself. His interest reflected more than just demographics, though; Mason was alone among his peers in foreseeing the tough new competition that would ensue between the independents and the Big Three once the sellers' market abated, which it did around 1950.

In fact, Mason urged a merger of the four surviving major independents -- Hudson, Nash, Packard, and Studebaker -- as early as 1946. But because all were prospering at the time, his call went unheeded.

Consider for a moment that Mason's proposal would have created a mini-GM holding something like 15 percent of the American car market. Packard would have contributed its traditional name prestige and engineering prowess; Hudson an image of performance and innovation; Nash its know-how as the most efficient outfit in the industry and, again, a penchant for innovation; and Studebaker a fine dealer network plus a respected line of trucks.

Even better, both Packard and Nash were sitting on substantial cash reserves. How different Detroit history might have been had this foursome banded together in the late 1940s.

Mason's dream would be realized, but only halfway. Packard ended up buying a weakening Studebaker in 1954, thus incurring a huge debt it could ill afford by that point, while Nash merged with a faltering Hudson that same year to form American Motors. Just four years later, all but the Studebaker nameplate would be gone.

Finding no safety in numbers as he looked toward the 1950s, Mason concluded that the key to Nash's survival was to outflank his competitors, especially the Big Three, with products the big boys hadn't thought of.

Again Mason was ahead of his time, for he was thinking of what we'd now call "niche" vehicles. The first fruits of this strategy appeared in 1950: the slick Anglo-American Nash-Healey sports car and the compact Rambler.

The latter was a solid if initially unspectacular seller, accounting for some 31 percent of total Nash output in 1951, its first full year of production -- a performance that undoubtedly strengthened Mason's belief in the salability of a still-smaller model.

Find information about how the dream became reality by continuing to the next page.