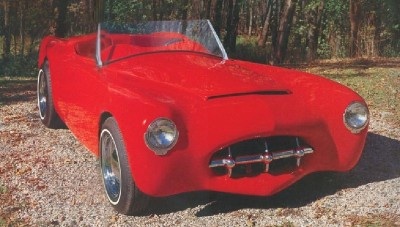 Postwar America saw a number of attempts by would-be automakers to produce new -- and often novel-cars. They all failed: Bobbi-Kar, Davis, Playboy Keller, Kurtis, Muntz, and others. To that list must be added B. Robert "Woody" Woodill's two-seater sports car, the Woodill Wildfire.

Woody always a car nut, went into partnership after World War II with his father, who owned a Dodge agency in Downey, California. In 1948, he bought his dad's share, and with buildings available, he soon added a Willys franchise.

About this time, sports car fever afflicted Woody He wanted a Jag, but his service manager talked him out of it (undependable, costly to fix, etc.).

This car has a modified Chevy V-8 and Turbo Hydra-Made.
©2007 Publications International, Ltd.

Undaunted, he decided to build his own, and to do it largely with Willys parts -- an assembly plant was nearby. So was Glasspar, a pioneer in fiberglass technology. Also close at hand was the Post Body Shop, which built a frame out of "angle stuff," as Woody put it. Thus, Woody ended up with a car with a custom-built frame, Willys engine, and a Jeepster front axle and bumpers. He later modified the original Glasspar body with a higher hood, rear deck, and doors, as well as a dummy hoodscoop and neatly integrated Aero-Willys taillights.

The Woodill Wildfire was first seen at the November 1952 Motorama in Los Angeles -- not the General Motors show, but one put on by Petersen Publishing Company, of Motor Trend fame. Interest ran high, so Woody set about getting his sports car into production, both fully assembled and as a high-quality kit car. A rectangular steel frame was devised, with the idea that it accept Ford engines and running gear, although other engines and transmissions could be -- and were -- fitted. With the motor pushed rearward in the chassis, most any engine chosen still left the Wildfire with close to 50/50 weight distribution. The fiberglass body kept weight low -- only 1620 pounds with the Willys engine -- so performance was brisk, even with the little Willys six.

The Woodwill Wildfire was introduced to the world November at the 1952 Motorama in Los Angeles.
©2007 Publications International, Ltd.

The 1953 Wildfire seen here is owned by Vance Ferry of Gurnee, Illinois. It runs with a modified Chevy V-8 and Turbo Hydra-Made, although the original Caddy mill and gearbox have been kept. At the time it was photographed, it had traveled only one mile after a total restoration. Vance points out the Wildfire is believed to be the first production fiberglass sports car and that it received a lot of publicity in the movies: Knock on Wood, Written on the Wind, and Johnny Dark, the last a racing film starring Tony Curtis and Piper Laurie. The Wildfire also received much publicity in Time, Life, Newsweek, and the car magazines.

Though it certainly deserved a better fate, the Wildfire can be appreciated for the pioneering role it played in using fiberglass bodywork and for setting high standards for kit cars. And also for being a bona fide, high-quality, handsome, and competent sports car.