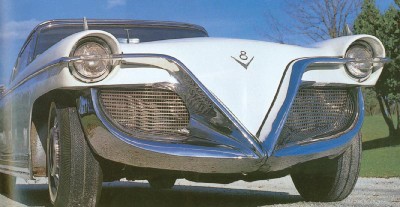 The distinctive nose of the 1953 Die Valkyrie was designed to emphasize the powerful engine. See more classic car pictures.

America's custom coachbuilders were but a shadow of their 1930s selves after World War II, but you could still drive something very special -- like the 1953 Die Valkyrie -- if you knew where to go and had enough money.

In 1952, a Cleveland real estate baron named Metzenbaum wanted a modern car with the spirit of the great early-1940s. He wanted the luxury of the Lincoln Continental and the power of Cadillac's brilliant overhead-valve V-8, first offered for 1949. Famed Milwaukee-based industrial designer Brooks Stevens did the rest.

The result was called Die Valkyrie, after Brunhilde and the other mythical "sisters of the wind" immortalized in Wagnerian opera. Per Metzenbaum's wishes, Stevens began with the 125-inch-wheelbase chassis and 331-cubic-inch V-8 of the contemporary Cadillac Series Sixty-Two.

The two-tone color scheme of the 1953 Die Valkyrie was both shocking and stylish.

Leaving both pretty much alone, he replaced the stock body with a striking four-seat steel convertible shell bearing rakish long-hood/short-deck proportions and both a solid removable roof panel and a skimpy "rag top." The last, Stevens recalled, was only for "getting you home if it started to rain."

Die Valkyrie's most radical aspect by far was its huge, sharply vee'd combination bumper/grille, deliberately chosen to emphasize what was under the hood. One wag snidely termed it a "snowplow," but at least it was different. Small parking lamps were set into the V's wide outriggers, which bisected the headlamps before wrapping around to continue as side moldings.

The 1953 Die Valkyrie's design was forward-thinking for the era.

Several elements make Die Valkyrie look a lot newer now than it actually is. Recessed cowled headlamps and a flat hood nearly level with the front fenders forecast Big Three styling by at least three years. In the 1960s, Cadillac itself would adopt taillights much like Die Valkyrie's compact, vertically vee'd units.

The Cadillac dash was just as stylish as the exterior of the Die Valkyrie.

This was also Stevens' first use of the "Washington coach" door line with its distinctive upward sweep that not only concealed long door openings (for easier back-seat access) but made a natural two-tone color break -- highlighted in the starkest possible way with white forward and black rearward. Fan-motif inner door panels were equally distinctive. The dash was stock 1953 Cadillac.

To build Die Valkyrie, Stevens enlisted the Spohn Works of Ravensburg, West Germany, mainly for its meticulous craftsmanship. Metzenbaum made noises about backing up 100 copies, and the car did cause a minor stir at the 1953 Paris Auto Show, but just six Die Valkyries would ever be built.

Stevens believes only three came to the U.S. The one shown here, number two, was once driven by Mrs. Stevens. You can see it at the Brooks Stevens Museum in suburban Mequon, Wisconsin, just north of Milwaukee.