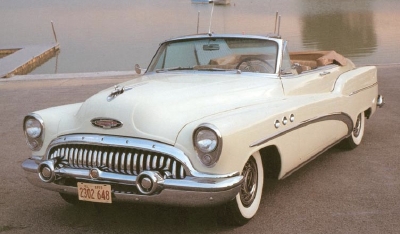 The 1953 Buick Super was part of a celebration of an important year in Detroit -- looking to the past as well as the future. Buick was one of two great American automakers celebrating their 50th birthday that year. Ford indulged in a splashy year-long party; Buick simply issued a more changed group of cars, with the 1953 Buick Super as an important member of the lineup.

Just a year later, the top-line Roadmaster and mid-range Super acquired a bulkier, reskinned General Motors C-body, shared with Cadillac and the senior Oldsmobiles. The low-priced Special got a new B-body for 1950 -- and quickly displaced the Super from its late-Forties status as Buick's best-seller.

As ever, early postwar Buicks were big, solid, and comfortable, powered by the division's reliable "valve-in-head" straight eight that by 1952 reached 320.2 cubic inches/170 horsepower for Roadmaster and 263.3 cid/124-128 bhp for Super. Division chief designer Ned Nickles had enhanced the traditional Buick look by giving the 1949s front-fender "Ventiports" and rakish "sweepspear" bodyside moldings. Both were perfect complements to the make's usual toothy grille, and would be much in evidence through 1958.

Two popular postwar innovations contributed to Buick's success in this period. One was the pillarless "hardtop convertible," which Buick pioneered in mass production (along with Oldsmobile and Cadillac) with its 1949 Roadmaster Riviera. A Super version arrived for 1950 and sold better than 56,000 copies. Abetted by Special models from 1951, Buick would sell vast numbers of hardtops through decade's end.

The Super was Buick's mid-range series, but the interior of the Super convertible was inviting enough.
©2007 Publications International, Ltd.

Equally popular was Dynaflow automatic, introduced as standard for the 1948 Roadmaster and made optional for other models the following year for about $200. Dynaflow multiplied torque via a drive turbine that was made to rotate through an oil bath by a crankshaft-driven power turbine. Though a smooth operator, Dynaflow did nothing for performance (leading some to call it "Dynaslush") but was immensely popular. By 1950, it was being fitted to some 85 percent of total Buick production.

Go to the next page to read about the 1953 Buick Super's styling and performance.

The 1953 Buick Super was part of a lineup marking Buick's 50th year of production. However, at first glance, the Golden Anniversary 1953s didn't seem all that, er, special, retaining the basic 1950-1952 bodies for one final year. Yet these were arguably the most changed Buicks since 1949.

Sized at 322 cubic inches, it boosted the Super to 164/170 standard horsepower with manual/ Dynaflow; higher compression (8.5 versus 8.0:1) gave Roadmaster 188 bhp. Accompanying it was a new 12-volt electrical system. This year's Special retained the 263.3-cid straight eight but would get the V-8 for 1954.

Though Buick was later with a postwar V-8 than most rivals, the Fireball was a fine engine: smooth, efficient, and as time would prove, extremely elastic. With successive increases in displacement, compression, and output, it would serve the division well into the 1960s.

Buick's 1953 styling was recognizably evolved from 1950-1952, but more impressive with a lower, wider grille; bigger front bumper guards; and a reprofiled hood/front-fender ensemble that imparted a lower look. Headlamps were newly combined with parking lights in oval nacelles, an idea lifted from the 1952 XP-300 show car that would return for 1954.

One surprising departure from the earlier body style was a shortish 121.5-inch wheelbase for all models, save the smooth Super and Roadmaster Riviera sedans that remained on a 125.5-inch span. Recent Roadmasters had measured 126.3 inches between wheel centers (130.3 for the four-door Riviera).

This change should have helped the Super, and did; series volume rose more than 40 percent for 1953. But Special nearly doubled its 1952 sales and Roadmaster went up almost 70 percent. Still, the Super Riviera hardtop was the second best-seller in the 1953 line (after the four-door Special). Skylark aside, Super continued with the same four models as Roadmaster -- Riviera sedan and hardtop, convertible, and a four-door Estate Wagon with vestigial wood structure -- at prices about $500 lower model-for-model.

But Super was on the wane, ever overshadowed by the Roadmaster in prestige, the Special for value and, from 1954, the revived Century for performance. By 1958 the line was down to just two-and four-door Riviera hardtops. It then disappeared, along with Buick's other longtime series names. So in a way, the 1953 was the last Buick Super that really was.

Go to the next page to read the specifications of the 1953 Buick Super. 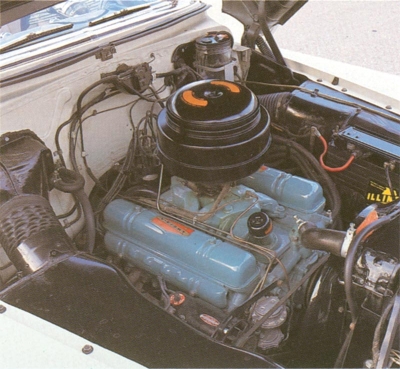 The 1953 Buick Super featured Buick's first-ever V-8, which would serve the division (with modifications) well into the next decade.