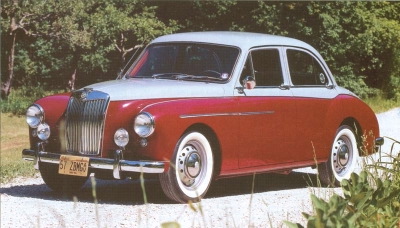 Gerald Palmer's Italian-influenced exterior design was quite a departure for an MG, but the Magnette's radiator grille left no doubt about its parentage.

A few changes were made early on, including the addition of swiveling front-door vent windows in March 1954 and the availability of more nonmetallic colors. Meanwhile, the slow production build-up had magazine editors fighting to publish tests (most had to wait until model-year 1955). A number actually purchased their own cars for the purpose.

BMC wasted no time sending Magnettes to the lucrative U.S. market, doubtlessly hoping to capitalize on the loyal following built up there by MG's sports cars. Figures are hard to come by, but we know that 312 Magnettes went to the States in 1954, and it's likely more than 300 were exported the following year, when the dashboard was covered entirely in attractive polished wood.

The MG Magnette was further freshened up for 1957, when the ZA became the ZB. This involved minor trim changes, including different decoration on the flanks, plus four more horsepower (via Increased compression and double valve springs) and higher overall gearing. The big news, however, was a weird new transmission option called Manumatic and an available "Varitone" body style.

Developed by Automotive Products/Lockheed, Manumatic was essentially a clutchless manual transmission not unlike Volkswagen's later "Automatic StickShift." It relied on a concoction of electrics and hydraulics that disengaged the clutch plate when the driver put pressure in any direction on the gear-lever knob; take-up from rest was provided by a centrifugal clutch.

Manumatic worked well so long as everything was in perfect adjustment, but that was rare. And because it cost an extra (about $140), it was not popular. Only 496 such cars were sold (about 110 exported to North America) before the option was quietly dropped in 1958.

The Varitone body option was more successful, partly because it included a larger rear window that was wrapped around slightly, American style. It also sported smart duotone paintwork, with the second color running from hood to roof to trunklid and down the sides to follow an upper-body crease line.

Varitone Magnettes looked good, but BMC made a meal of the body, hauling standard "small-window" shells across the road from Pressed Steel to Morris Motors, where the aperture was enlarged by hand.

Overall sales also improved as time went on. No fewer than 9,438 ZBs were built in 1958, the final calendar year for this Magnette generation -- peanuts by Detroit standards, maybe, but it certainly made Abingdon's planners proud.

Though too heavy to be a successful competition car, the final Magnettes had a top speed of 86 mph, very brisk for such a small-engine British saloon. And the MG was still regarded as one of the best-handling sports saloons of its day.

By this time, Gerald Palmer had long since moved on to work with GM's Vaux-hall subsidiary in Luton, leaving behind an uninspiring group of engineers operating mainly out of BMC's other main factory, the one-time Austin plant at Longbridge. They didn't look likely to come up with a better Magnette.

Sure enough, the new Mark III of 1959 was a dreadful thing for which the British press never had a good word, being simply a hotted-up version of a lumpy new-generation Austin Cambridge. At least it was never assembled at Abingdon, where John Thornley and his colleagues were much happier building MGAs, Austin-Healey Sprites, and, soon, MGBs and Healey 3000s.