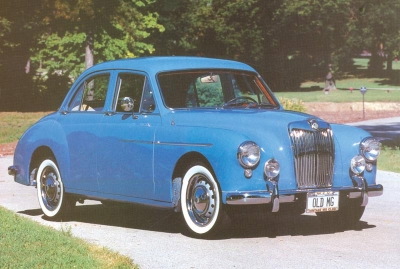 Whether ZA or ZB, Magnettes rode a 102-inch wheelbase. The 1958 ZB showed off the chrome fender/door spear that replaced the curved front-fender brightwork on the ZA.

Gerald Palmer was obliged to use existing engines, gearboxes, and axles for his new MG/Wolseley, which was also originally intended to have a separate wood-framed body than the MG Magnette. This thinking reflected a good deal of indecision within the Nuffield group, as well as the British motor industry's general complacency of the day.

Then BMC was born with Leonard Lord in charge. He wanted a new family of engines phased in as soon as possible, so Palmer's assumptions had to change.

The upshot of all this was that the new Wolseley, called 4/44, was launched as scheduled in autumn 1952, using the old MG powertrain as first envisioned. But the Magnette, which had been set to appear first, was delayed a full year so it could be the first car using BMC's new B-series engine and transmission.

The unit body/chassis was contracted to the Pressed Steel Company, an independent bodymaking concern whose factory was just across the road from BMC's big Cowley plant, where the cars would be painted.

But for some reason, it was decided to assemble the Magnette at Abingdon (just south of Oxford), while the 4/44 would be made at Cowley alongside other Wolseleys (and Rileys). Illogical? Maybe, but such thinking would prove all too typical of BMC.

The new models' appearance was another matter: certainly remarkably curvaceous and attractive, compared to previous MGs.

"I had been to several Continental [auto] shows," Palmer stated, "and had realized that some Italian styles were really wonderful. British styling, by comparison, was just pathetic. As with the Javelin, so with this new car, the styling was all mine. This time I wanted to . . . approach Italian themes. [So] I had to get the roof and the floor-pan right down, which partly explains the unit construction. Another thing was that Pressed Steel were doing [much of] the body engineering, and it all made volume-engineering sense."

The Magnette powertrain was also largely engineered elsewhere, yet it's remarkable that the main project team comprised only Palmer and 10 engineers. Nowadays, of course, with the aid of computers, it would take at least 100 people merely to decide a car wasn't worth doing.

The Magnette ZA was released in October 1953, but apart from a handful of motor-show vehicles, only eight were built by the end of the year, mainly because production of the brand-new B-Series powertrain took time to crank up.

Series production didn't begin in earnest until February 1954 and reached about 80 cars per week by year's end. In 1955, however, the rate soared to more than 180 a week, which meant that the ZA was the fastest-selling MG saloon ever.

Learn more about the MG Magnette B-series on the next page.