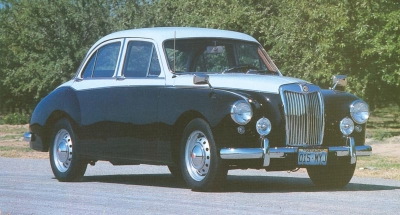 Gerald Palmer's work on the 1953-1958 MG Magnettes was a long and arduous tale. Morris Motors, BMC's "other half," was founded in Cowley, near Oxford, by William R. Morris.

He, too, was knighted (in 1929) and made a peer of the realm (in 1934), choosing the title Lord Nuffield. By that point, his enterprise, subsequently retitled the Nuffield Organisation, encompassed not only the Morris and MG marques but also Riley and Wolseley, two of many companies Sir William picked up along the way.

Lord Nuffield was a distrustful sort who never liked Lord Austin, so it's ironic that the Austin-Morris "wedding" was largely brokered by a man who had worked for both. This was Leonard Percy Lord, production wizard and self-styled car designer.

Though Morris was Britain's dominant motor company as early as 1913, Lord helped make it even bigger -- only to be fired by Lord Nuffield in 1936 in a dispute over profit sharing. Vowing revenge, Len Lord got himself hired at Austin some two years later and was heading the place by 1942 (after Lord Austin's death the previous year).

By the early 1950s, he had built Austin into a near sales equal for Morris, helped by newer, more modern postwar cars. But Lord knew that cutthroat competition was hampering both companies and had long favored a merger with Morris. It took him several years, but typical of the man, he finally managed it.

Such was the backdrop for Gerald Palmer's work on the ZA Magnette. His first proposal, accepted with few dissenting voices, called for not just a new MG but also a new Wolseley saloon sharing the same basic unitized construction, running gear, and styling.

In a ploy worthy of General Motors, he distinguished the models by having the Wolseley sit two inches higher, which he thought could be done with fair ease by modifying the fenders, underbody sills, and suspension pick-up points. At first, MG had little to do with this car, having no formal design office at the time.

But MG general manager John Thornley insisted on having final approval as to styling, use of the famed MG octagon badge, and other details. He also chose the name, recalling MG's 1930s series of fine six-cylinder Magnette sports cars.

The first-series ZA model ran through 1956 and was powered by a 60-horsepower 1.5-liter engine developed by BMC stablemate Austin.

For information on the MG Magnette ZA, continue on to the next page.