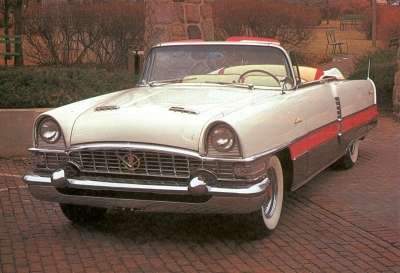 All Packards were redesigned for 1955, but the dual hood scoop was unique to the Caribbean.

The year 1955 promised to be a turning point in Packard history, at least on paper, with a bold new 1955 Packard Caribbean among its models. Though still saddled with a body design that dated from 1948-49 for most of the lineup, designer Dick Teague managed a remarkable facelift with all the popular contemporary touches: wrapped windshield, eggcrate grille, giant "V" symbols in strategic places, twin radio antennas, "cathedral" taillights, miscellaneous scoops and scallops, even a set of "running lights" in the leading edges of the rear fenders.

With all this, Packard had a new difference to sell: high performance. A 1954 Caribbean would amble up to 60 mph in 15 seconds and break loose like any other car on washboard roads. The 1955 hit 60 mph from rest in 11.5 seconds and almost floated over the worst possible surfaces, including railroad tracks. (Packard delighted in displaying the difference between its Patrician sedan and a Cadillac, filmed tackling a notorious rail crossing in downtown Detroit.) At last, Nance had a styling/engineering package that fit his idea of what a Packard should be.

It certainly suited the Caribbean, which now rode a more competitive 127-inch wheelbase, made possible by a modern miracle called plastic tooling. This not only took half the time and cost out of the tooling process but permitted, as product planner Roger Bremer said, "the production of a complete line of cars that would not have been possible by conventional methods."

Instead of short and chunky Buick rivals, Packard now had long and glitzy Cadillac competitors. For the first time, a Caribbean could look an Eldo in the eye and beat it in a drag race.

The 1955 Caribbean featured modified side trim, a three-tone paint job, and a sumptuous interior.

Special features identified the 1955 Caribbean: double dummy air scoops on the hood instead of a mascot, and a slim, bodyside contrast-color panel formed by two full-length chrome moldings, the top ones swept up at the rear to fender-mount antennas. And, not to be outdone by lesser lights like Dodge and DeSoto, most Caribbeans came with bright, three-tone paint jobs.

One reason: early mechanical problems and workmanship lapses, perhaps because the cars were rushed into production before all the bugs were out. Then too, the year-old Studebaker-Packard Corporation was in deep trouble, running out of money and suffering dealer raids from Big Three rivals, both of which only further undermined buyer confidence.

To learn about the even more lavish 1956 model, keep reading on the next page. 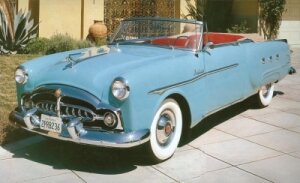