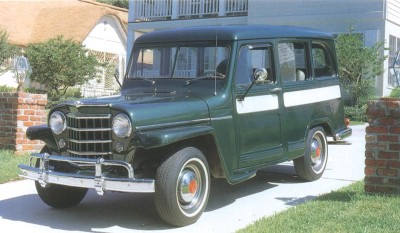 The Jeep Station Wagon and panel delivery were mostly carryovers between 1953 and 1955. However, one significant option was added to the four-wheel-drive versions of both in 1954: the 115-bhp six cylinder engine. That year also brought minor revisions to the front end, including a grille that now had three, instead of five, horizontal slats.

In a September, 1954, report Motor Trend tested a wagon with the flathead six. This engine was essentially the same one used by the Kaiser automobile, then nearing the end of its career in the United States.

Oddly enough, the term "Jeep" was being downplayed by this time, though the Willys name was still prominently featured. There was no mention of the Jeep, per se, in literature dealing with the Station Wagon. But the four wheel-drive version still performed like a typical Jeep.

According to the Motor Trend reviewer's report, the Station Wagon "bounded over the worst ruts we could find (we couldn't take the other cars through the same 'tank traps') and settled down quickly. One dust-covered driver got out of the Jeep complaining that he couldn't get it stuck! The way it goes through soft earth or sand, through the brush, and up and down hills is a wonder to behold: The wheels fling themselves around some, but the car just keeps digging in. On a rain-drenched, muddy incline, the Willys never faltered. In fact, its driver eagerly expected that he'd have to pull some of the other back sliding, spinning cars out of a ditch before the slippery hill was conquered."

In summarizing their reaction to the four-wheel-drive Jeep wagon -- rather a different breed than the typical Motor Trend subject -- the test drivers commented:

Read on to find out about the Jeep Utility Wagon.