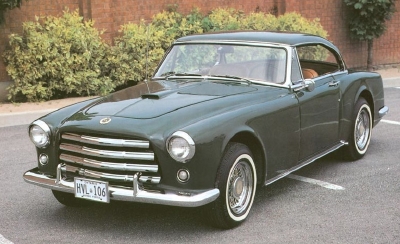 Sterling H. Edwards was a dreamer in San Francisco who envisioned an exclusive, low-production personal-luxury car -- what would become the 1953-1955 Edwards America. Only able to rely on home-grown design talent and whatever parts he could lay his hands on, Sterling Edwards could only manage to build six of his Americas.

Edwards' first car was the 1949 Special, a four-seat convertible with a hardtop and windshield removable for racing. The Special did race, mainly in West Coast Sports Car Club of America events, and with some success.

Weighing just 2,500 pounds for the road or 2,000 pounds race-ready, this precursor to the 1953-1955 Edwards America rode a sophisticated chassis built of chrome-molybdenum tubing with all-round independent suspension and disc brakes. Power was supplied by the inevitable Ford flathead V-8, downsized to 122 cubic inches to stay within the 2.0-liter displacement limit for racing.

To make up for lost size, Edwards fitted dual Stromberg carburetors, a hot cam, and a special overhead-valve cylinder head with ultra-high 11.0:1 compression. With 115 horsepower available at 5,300 rpm, the Special could run about 155 mph flat out.

In 1951 Edwards followed up this preview of the 1953-1955 Edwards America with a second experimental that made greater use of stock components. Among them were the rugged, 100-inch-wheelbase chassis from Kaiser-Frazer's compact Henry J and Chrysler's potent new 180-bhp, 331-cid hemi V-8.

A lightweight, carefully assembled fiberglass body made up for the heavier Henry J chassis, and this plus the hemi combined for an excellent power-to-weight ratio. But though it had plenty of muscle, this Edwards oversteered merrily, and chassis flex reared its ugly head. Sterling went back to his drawing board. What he came up with was the Edwards America.

Keep reading to learn more about the development and design of the 1953-1955 Edwards America.

What ultimately emerged from Sterling Edwards long experiment were his "production" models, the 1953, 1954, and 1955 Edwards America. Announced in late 1953, this was another four-seat convertible but with good-looking, rather Italianate lines.

Highlights included a large, rectangular eggcrate grille; slab sides relieved by a pronounced character line ahead of the rear wheel openings; and a boxy back wearing stock 1952 Mercury tail lamps. The instrument panel and steering wheel of the Edwards America were contemporary Oldsmobile items, the upholstery leather.

Edwards retained the Henry J chassis for the first Edwards America but exchanged the hemi for a 185-bhp, 303.7-cid Oldsmobile Rocket V-8. Series production was definitely contemplated, though on a very limited basis, with an as-delivered target price of $4,995.

By 1955, Edwards was forced to charge over $7,800 for an Edwards America, though that included such niceties as electric window lifts, GM's Hydra-Matic transmission, and Kelsey-Hayes wire wheels. But the entire effort amounted to little more than a hobby -- and on a shoestring at that. After developing a pretty lift-off hardtop, Edwards threw in the towel and turned to other pursuits.

Check out the specifications of the 1953-1955 Edwards America on the next page.