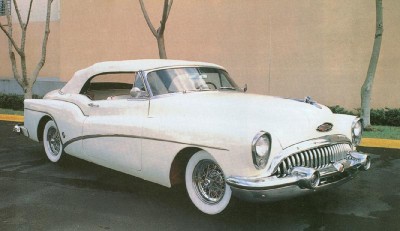 The 1953 Skylark shared its new overhead-valve V-8 with the Roadmaster.

Dynaflow automatic, power steering, and all the developments of 1953 can be credited to Chayne; so can the XP-300 show car which inspired the Skylark (although its methanol-burning, supercharged V-8 was destined to remain strictly experimental).

At 4.00 x 3.20 inches (322 cubic inches), Buick's new engine had its largest-bore engine in the past 25 years. "Perhaps the most interesting feature is the combustion chamber," wrote John Bond in Road & Track. "Valves are arranged vertically and in line. This requires a specially shaped piston crown to achieve the desired compression ratio, set at 8.5 to 1, the highest in the industry.

The 1953 Skylark had dash controls in a convenient arrangement.

"A simple way to visualize this combustion chamber is to think of it as exactly like the four-valve Model J Duesenberg with one pair of valves removed. The Buick V-8 develops .538 horsepower per cubic inch (among the best), weighs only 635 pounds, and is extremely compact, with an overall width of only 26.56 inches." The engine was also short -- so much so that Buick was able to reduce the Roadmaster wheelbase by nearly five inches from 1952.

Good designs live a long time. As Michael Lamm has written, "its heads and manifolds have been revamped several times since 1953, but the basic block served Buick until 1970. In 1959, displacement grew to 401 cubes; in 1963, an overbore brought it to 425. And in 1967 there was considerable structural revision and re-manifolding, but it remained essentially this same little 1953 322-cubic-inch V-8 for 17 years."

To capitalize on the newfound V-8 power, Buick introduced a modified automatic called Twin-Turbine Dynaflow. While keeping the transmission's famed smoothness, Buick engineers worked to overcome its sluggishness by placing twin turbines in the torque converter between the pump and stator.

Claimed benefits were 10 percent more torque, which not only aided acceleration -- no more "Dynaslush" -- but also lowered engine rpm for quieter performance.

Buick made its official announcement on October 6, 1952: "Public interest has been so great that we have decided to manufacture [the Skylark] in limited quantities," said Ivan Wiles. Built on a Roadmaster chassis, it went into production in January 1953, and deliveries began by spring at a cool $5,000 retail.

Buick touted the Skylark's "sports car" features: "Styling is very similar to Buick's present line, except the new bombsight on the front has been recessed into the hood and the trunk lid has a faster slope to the rear. The 'taper-through' fenders, first introduced by Buick a decade ago, are fully cut out to reveal the Italian-made wire racing wheels.

"The new rapier-styled sweepspear molding consists of a fine strip of chrome originating on the front fender and curving gently downward to the rear wheel. From this point it sweeps sharply upward, outlining the wheel housing and flowing back to the taillight. A medallion carrying the Buick crest, located on the rear fender in front of the wheel housing, is the only other decoration on the side of the car." Read that last statement to mean that the Skylark did without Buick's traditional "Ventiports" on the front fenders.

For more on the 1953 Buick Skylark, continue to the next page.