The 1952-1955 Bentley R-Type Continental was perhaps the most exciting Bentley of the postwar period. It was a sensationally styled, lightweight fastback coupe built on the R-Type sedan chassis, but some grumble to this day that it aped GM's 1949 fastback look.

Only a small number were built, all two-door four-seaters, most with bodywork by H.J. Mulliner. The line was originally powered by the Bentley six as fitted to the sedans, but a larger-capacity 4,887cc version was specified beginning in 1954. The Bentley R-Type Continental was a true GT with handling that belied its massive size and still considerable weight. Just the thing for blasting across the continent at easy three-figure speeds of up to 115 mph.

This car is rare, but worth seeking out, and is a modern classic even among Bentleys. 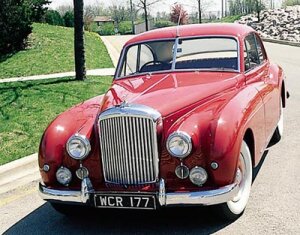