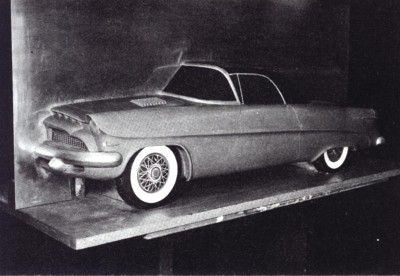 The 1954 Panther Daytona was designed to replace the Packard Pan American. In 1953, Arbib sketched what he called a “Panther,” apparently a proposed Pan American update. Packard, meanwhile, had decided to pursue its own sports car project. The design assignment was handed to young Richard A. Teague, who by then had relieved John Reinhart as chief stylist under Ed Macauley.

What would become the 1954 Panther Daytona was, as Teague remembers, “a lunch hour production. Somebody walked into Styling one day and said, ‘Oh yeah, Teague, come up with a replacement for the Pan American.’ We didn’t have much time to work on it, and I personally built only a quarter-scale half-model in clay, which we placed against a mirror to get the full dimension.

“It was originally to have been called ‘Grey Wolf II,’ in honor of the first Grey Wolf racing car of the early 1900s,” Teague continued. “But some of the grey wolves at Packard didn’t like that, so the name was changed to ‘Panther.’ Then, after a speed run at Daytona, that name was added, too.”

Unlike its predecessors, this new series of two-seat Packards employed bodywork of glass-reinforced plastic (GRP) instead of steel. Credit for originating the idea of GRP car bodies usually goes to designer Howard A. “Dutch” Darrin (for his one-off, 1946 Kaiser-Frazer-based convertible and the production 1954 Darrin sports car) or to GM (1953 Corvette). But few realize that Packard was talking about this as early as October 1941.

That was the month when Clyde Vandeburg of Packard Public Relations wrote a piece on the subject for Esquire magazine, accompanied by renderings of fiberglass Packards by John Reinhart and George Walker. As the firm’s rationale was potential steel shortages resulting from the defense emergency, Darrin remains the first to propose GRP as a steel replacement on grounds other than simple supply.

For Packard in 1954, building the Teague Panther in fiberglass made as much sense as it did to Chevy for the Corvette or K-F for the Kaiser-Darrin. GRP molds cost far less than steel dies, and body parts could be turned out much more rapidly. Then too, Ed Macauley had some useful outside resources as potential contractors: Creative Industries in Detroit and Mitchell-Bentley in Ionia, Michigan.

According to Leon Dixon, who carefully researched the story for Packard Magazine in 1984, Creative handled all chassis and body engineering for the Teague Panther, while Mitchell-Bentley did the final trim, including tops and interiors. Creative also made the GRP molds for the body panels. Dixon notes that these firms were a perfect team. Mitchell-Bentley had been making GM production bodies since the late 1930s, had built the experimental Packard Balboa-X of 1953, and had done all the conversion work on the production 1953-54 Caribbean. Creative had been skillfully developing special bodies for industry clients since its founding in 1950, and was well experienced with fiberglass. (Not widely known is the fact that the first DeLorean mockup was done at Creative, which is still in business today.)

Packard announced the Panther at a round of 1954 auto shows and with a special brochure, much like those that GM issued on its Motorama specials. The front end was a confusing mishmash of several design ideas, but Teague had given the car smooth, clean flanks, and cleverly blended in the “sore thumb” taillights of the production 1954 Clipper. “Functionalism is the key in the design,” said the brochure. “The traditional, classic Packard grille has been modified to afford maximum cooling. The high guideline fenders hood the headlights. The sloping clamshell hood provides unobstructed visibility.” Equally significant -- and just slightly behind GM -- was a wrapped windshield, a fairly exotic piece of glass-bending at the time.

To further establish the Panther’s sporting credentials, Packard installed the biggest engine it had: a 359-cubic-inch straight eight. On the first two examples, this was jacked up to 275 horsepower via a McCulloch centrifugal supercharger. With no modifications other than a racing windscreen, a Panther flashed through the measured mile on the sands of Daytona Beach at the highest speed ever attained by a car in its class: 131.1 mph. It was quite an achievement. Indeed, none of its rivals at the time, including Corvette, could match it.

On the next page, find out how the Packard Panther Daytona ended its short run.