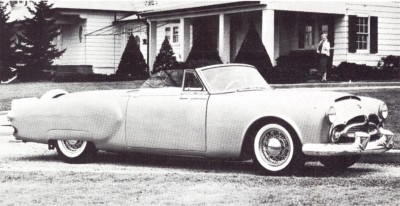 The Packard Pan American was another sporty two-seater, like the Panther. While Macauley and Reirihart were dreaming up their "speedster," Packard president Hugh Ferry had engaged the Henney Body Company, the firm's longtime supplier of hearse and ambulance bodies, to create a two-seat Packard of its own.

In those days, anybody who was anybody in Detroit had to have a sports car, if only for show. Most companies bought a Jaguar XK-120, the ne plus ultra at that time, took careful measurements, and went to work using as many off-the-shelf components as they could. Nash teamed with Donald Healey on the 1951-1954 Nash-Healey. Chevrolet readied a production two-seater called Corvette, while sister GM divisions produced a raft of Motorama specials in its image.

Ford replied to Chevy with the Thunderbird for 1955, a year after Kaiser produced its sliding-door Darrin. Hudson offered the memorably ugly, slow, and unsaleable Italia, based on one of the wilder imaginings of chief stylist Frank Spring. Even Studebaker briefly toyed with the idea of a sprightly sportster, derived from its lovely "Loewy coupe." Packard was probably the firm least likely to build a production sports car, but it did turn out up to six Pan Americans, apparently with the idea of limited series production.

Designed by Richard Arbib of Henney, the first Pan American was hurriedly cobbled up from a stock 1951 Series 250 convertible for New York's International Motor Sports Show in March 1952. Chopped and channeled, it dealt once and for all with the "high pockets'" slab sides, was elegantly trimmed throughout, and wore Arbib's own rendition of Packard's traditional "ox-yoke" grille.

Henney spent just under $10,000 on the venture. Later, it tried unsuccessfully to develop a market for the car. Of course, Packard management couldn't foresee any kind of demand at the $18,000-odd they'd have to charge, so the Pan American was stillborn. It did lead to a sporty production model, however, the famous Caribbean. But that's another story.

On the next page, learn about the design of the Packard Panther Daytona.