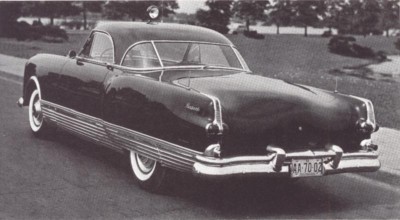 The Macauley "Panther" as it looks today. Rear wiper was a novel touch for 1953.
©2007 Publications International, Ltd.

The Packard Panther was designed largely by staff designer John Reinhart. After Reinhart had conjured up Packard's all-new 1951 line, Ed Macauley asked him to help spin off a "speedster" version, continuing the firm's prewar practice of building swoopy two-seaters with bits and pieces from contemporary production models. Riding the 122-inch-wheelbase junior chassis, the first Panther was a foreshortened coupe, with a permanent hardtop fashioned from what appears to be a 1953 Patrician sedan roof.

When it first appeared in 1953, the Panther wore the current-production rear bumper, 1952 hood crest, 1951 Packard lettering on a 1952 grille, and a hood scoop borrowed from the Henney Company's own two-seat Packard, the Pan American. Painted black and bearing a partly blacked-out grille, this one-off was later given the Panther name, with big block letters on the grille. Whether it was first used here or was just a reaction to other influences is not certain, but the letters were undoubtedly of Packard origin, as we could see when we photographed the car at the Packard Club national meet last summer.

One of the faults in Reinhart's 1951 body design was its shallow greenhouse area and high sides. (For this reason, Reinhart nicknamed it the "high pockets" shell, and fought unsuccessfully with management to lower the beltline before production.) Macauley successfully disguised this on the two-seater with a broad, ribbed, chrome-plated brass applique along the lower body. It came off pretty well, but would have cost the world to implement on production cars. Also fitted were custom wheel covers bearing 1951 Patrician cloisonne center emblems. Curiously, Ed mounted a swiveling spotlight on the roof.

This is an original factory photos of Macauley's 1953 two-seat special. Swivelling roof spotlamp, disc wheel covers, shaved deck, and rear-fender dual exhausts have all been changed since.
©2007 Publications International, Ltd.

Only one Macauley Panther was built. Although originally powered by Packard's 327-cubic-inch straight eight hooked to the firm's self-shift Ultramatic Drive, it now carries a Chrysler V-8 and TorqueFlite automatic. Several styling features have also been changed along the way. Gone are the rooftop spot, the prominent chrome highlights along the front fenders (to match the original ones at the rear), and the dual exhaust outlets ducted through, special holes under the taillights.

The enormous rear deck -- "large enough to land a Piper Cub," as Tom McCahill said of the 1959 Chevy -- was shaved in Ed Macauley's time, but now bears a conventional 1953 trunk handle. Six chrome dummy louvers have been added to the side of each front fender, while the wheel covers have been replaced by Packard/Kelsey-Hayes chrome wires.

Ed Macauley drove his Panther into the late Fifties. Though it apparently spent some time in Connecticut's former Melton Museum, its interim history is obscure.

Continue to the next page to learn the origins of the Packard Pan American.