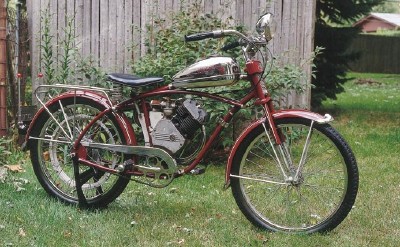 Though perhaps more "motorbike" than "motorcycle," Whizzer's contribution to the sport centers more on what it did than what is was. Mounts like the 1951 Whizzer Pacemaker gave virtually anyone the chance to experience motorized travel.

In the late 1930s, Whizzer began providing a kit that enabled anyone with $80 and a bicycle to experience the thrill of motorized travel. Not fast travel, mind you, but faster than their legs alone could take them.

These were Whizzer Pacemakers, which could be fitted with all manner of ritzy accessories, including "dual" exhausts.

Many an enthusiast cut their riding teeth on Whizzers in the early 1950s, the experience often encouraging them to progress to larger mounts.

Whether the company's popularity helped incite the scooter trend in the late 1950s is hard to say, but if so, Whizzer became a victim of its own success.

With the flood of imported scooters and mopeds that swept the country in the 1960s, Whizzer faced competition it couldn't underprice, and the company closed its doors in 1962.

Continue to the next page to see more 1951 Whizzer Pacemaker motorcycle pictures. 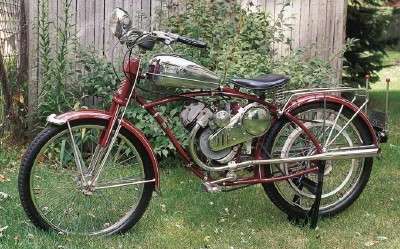 Whizzer Pacemakers could be fitted with an assortment of accessories including "dual" exhausts.

Even after the 1951 Whizzer Pacemaker motorcycle was introduced, the company continued to sell kits advertised for their ability to convert any "balloon-tire bike" to motorized transportation.