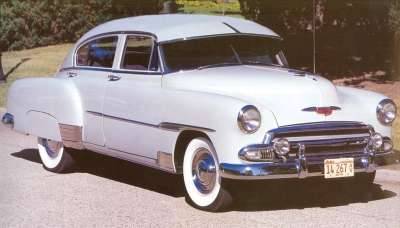 Taste is fickle, and the 1951 Chevrolet Fleetline Deluxe four-door sedan is evidence of that. In just five years, Chevy's first fastbacks went from being the division's best seller to vanishing without a trace.

Chevy introduced a fastback as part of its 1942 passenger car revamp. Called the Aerosedan, the new style was offered as a two-door only and teamed with the Sportmaster four-door sedan to create the new Fleetline series. The Aerosedan was well received by the public, and was Chevy's top-selling model for 1942, 1947, and 1948.

Chevrolet naturally sought to capitalize on such success, and expanded its line of fastbacks as part of the division's first postwar car design, introduced for 1949. Not only were sloped-deck models available in Special and DeLuxe trim, but there were four-door versions as well. All fastbacks were dubbed Fleetlines to differentiate them from the companion notchback Styleline coupes and sedans.

Mechanically, these were typical late-Forties Chevrolet, powered by the 1937-design 216-cubic-inch inline six, which produced 92 horsepower. The new Powerglide automatic transmission was introduced for 1950, and cars so-equipped got a 105-horsepower 235-cubic-inch six borrowed from Chevy's trucks.

Demand for Fleetline DeLuxes remained strong through 1950, and production was little changed from that of the previous year, Fleetline Special sales dropped to 43,682 four-doors and 23,277 two-doors.

The following year was the last that a full line of Fleetlines would be offered. DeLuxe sales dropped noticeably for 1951, to 131,910 two-doors and 57,693 four-doors. Combined Fleetline Special demand plummeted to just under 10,000 cars. Still, Chevrolet's overall sales were up, making the fastback's share of total production even lower.

For 1952, the basic Fleetline Special series was dropped, along with all four-doors, leaving only the two-door DeLuxe. Demand had further cooled by this time; only 37,164 Fleetlines were built for the model year.

Neither the fastback nor its Fleetline name would continue as part of Chevy's redesigned 1953 range. The Bel Air hardtop, introduced in 1950, was gaining popularity, and took over as the the division's primary fixed-roof sport model.

The Fleetline shown here spent most of its life in California and Arizona. Steve Bergin of Barrington, Illinois, bought it from the original owner in 1988, and gave it a meticulous body-off restoration. The car has the standard three-speed manual transmission. Options including turn signals, a radio, fog lights, fender skirts, rocker-panel trim, and a sun visor.