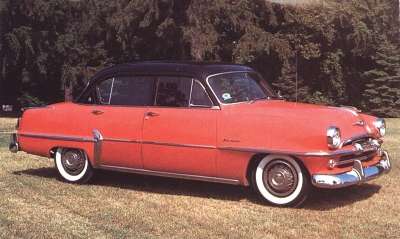 Though the Belvedere name is a fanciful one, time was when automakers showed little imagination in naming their wares. In the beginning were models, with a capital M and some letter or number that often made sense only to the manufacturer. Later, Standard, DeLuxe, and Custom (sometimes Master, occasionally Salon) were used to indicate series in ascending order of price and posh, followed by redundancies like Special DeLuxe or, even worse, Super DeLuxe.

Some played the numbers game. This usually involved cylinders (Six, Eight, Twelve, Sixteen, but seldom "Four"), engine and horsepower (Auburn's 8-98 of 1931, for instance), and wheelbase in inches (Packard's One-Twenty). There were also obscurities like production starting date (Cord 810) or even the hoped-for miles on a tank of gas (Nash 600). So though the cars may have embodied no end of creative genius, their names were hardly inspired.

Not that there weren't exceptions. Apperson had its Jack Rabbit as early as 1907, Stutz offered its jazzy and romantic Bearcat roadster five years later, Jordan presented a dashing Playboy in 1920, and Reo rolled out the Flying Cloud in 1927. But such appellations were as rare as they were colorful, and mostly denoted only a single model or body style, not an entire line.

Studebaker broke out of the mold with its Commander, President, and Dictator series of 1927. Impressive titles, though public opinion dictated retiring the last once Hitler started running roughshod over Europe. The trend gained favor, though, and by the late Thirties we had Buick's Special/Century/Roadmaster/Limited lineup, Nash's Ambassador, Hupp's Skylark and the later Graham Hollywood, and Chrysler's English-sounding Royal, Windsor, and Imperial, to name a few.

While Chevy had adopted the Fleetmaster, Stylemaster, and Fleetline tags as early as 1942, it wasn't until the postwar years that the Low-Price Three turned to less prosaic names in earnest. Plymouths, for example, were still DeLuxe or Special DeLuxe as late as 1950. Then new nomenclature arrived with the expanded 1951 lineup. Concord and Cambridge, evoking images of colonial New England, fit nicely with the make's traditional good ship Mayflower heraldry. But Cranbrook, the top-line series, incongruously referred to a town in British Columbia. At least it sounded nice.

Detroit's early hardtops harked back to prewar practice with names of their own, many of which stuck around for decades -- Riviera, Coupe deVille, Sportsman, Diplomat -- though on very different cars. They were also uniformly top-line models. Thus, when Plymouth's belated entry appeared for 1951, its full (and rather awkward) title was Cranbrook Belvedere.

Though no one seems to remember why Belvedere was chosen, we'll hazard a guess. Chevy's first hardtop bowed for 1950 under the name of a ritzy Los Angeles enclave still renowned for its Hollywood luminaries and exclusive shops: Bel Air (which means "beautiful line" in French). Now it just so happens that there's a counterpart community in Marin County, near San Francisco, called -- you guessed it -- Belvedere.

We'd be hard-pressed to prove that rationale, but the name was a good one in any case. Aside from a certain élan, it was certainly in the right neighborhood for an upmarket model. And it served Plymouth well for 18 years.