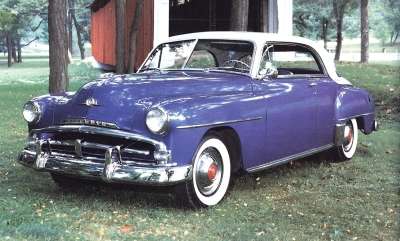 The year 1950 saw the start of historic changes that would dramatically improve the fortunes of both Plymouth and Chrysler Corporation by 1955, and not just because of the promising 1951-1952 Plymouth Belvedere. First, K.T. Keller became company chairman after 15 years in the president's chair, which passed to the dynamic Lester Lum "Tex" Colbert (pronounced CUL-bert).

Already on board was Virgil M. Exner, recruited by Keller from the Raymond Loewy team at Studebaker to head up an advance-design section independent of Henry King's production studios. By the winter of 1952-1953, "Ex" would be modifying King's initial 1955 designs, which he thought were "lousy."

Meanwhile, GM had scored a big hit with the industry's first "hardtop-convertibles," the 1949 Buick Roadmaster Riviera, Cadillac Series 62 Coupe deVille, and Oldsmobile 98 Holiday. Highland Park replied for 1950 with the Dodge Coronet Diplomat, DeSoto Custom Sportsman, and Chrysler Newports in Windsor, New Yorker, and Town & Country trim. Like the seven prototype T&C hardtops built in 1946, they were based on convertible body-shells, and were thus much more stylish than their sedan and wagon running mates yet about as practical.

Plymouth had to watch Chevrolet's new 1950 Bel Air sell a smashing 76,662 units before countering with a hardtop of its own. Predictably perhaps, it was late, arriving on March 31, 1951. But the Belvedere was one of the smartest closed Plymouths in recent memory, far less boxy than the rest of the line and arguably better-looking than its bigger cousins. However, it shared their three-piece wraparound rear window, which combined with the pillarless roofline for a light, airy appearance, and was most always supplied with the roof and lower body in contrasting colors.

The latter's chassis was retained for this year's version of the top-line Special DeLuxe, called Cranbrook, which included the new Belvedere as well as convertible, four-door sedan, and notchback club coupe/sedan. Cambridge listed only the last two, while Concord offered three-passenger coupe, two-door fastback sedan, and the pioneering all-steel Savoy and Suburban wagons. Other than this, there was little new to talk about.

There was even less on the 1952s, which were virtual 1951 carryovers apart from a revised rear license plate lamp/holder and bolder "Plymouth" lettering above the grille. The Belvedere, though, gained a further distinction in new "saddleback" two-toning, with the trunklid painted to match the roof. Chrome moldings curved down onto the rear fenders from the C-pillars to define the color break, with Belvedere script just below the pillars at the beltline's trailing edge.

With the Korean conflict at its height, Chrysler was as heavily engaged in military production as any automaker, so civilian output was way down this year, Plymouth's by a sizeable 23.5 percent.

In later years, Plymouth hardtop coupes, like most everyone else's, were priced about the same as comparably trimmed four-door sedans. In the beginning, though, the Belvedere was a premium piece. The 1951 arrived at $2,114, nearly $300 more than the Cranbrook four-door and only $108 below the convertible.

The 1952s maintained this spread, though prices rose by $102. Forecasting the huge popularity of hardtops in general, the Belvedere outsold its open-air counterpart better than three to one. However, at 51,266 units for 1951-52, it was far adrift of low-price rivals. Ford built 187,606 Victorias for the same period, Chevy 177,990 Bel Airs.

To learn about changes for the 1953 and 1954 Belvedere, keep reading on the next page.