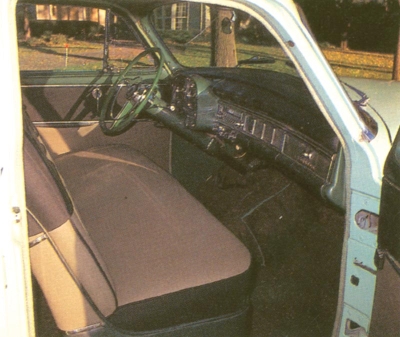 The 1952 Chrysler New Yorker sparkled with all its chrome, but only 2,146 were built.
©2007 Publications International, Ltd.

There were no significant changes between the 1951 and 1952 Chrysler New Yorker models (the only obvious difference was the incorporation of backup lights into the tail lamp assembly of the 1952s), and Chrysler didn't even keep separate production records for those two years. The reason was the Korean conflict, which many feared would stop civilian car production dead, but didn't.

The 1951-1952 Saratoga, hemi-powered on the shorter Windsor chassis, was the hottest Chrysler and a notable stock-car racer, but for young upwardly-mobile professional people (you didn't abbreviate that in those days), the posh Chrysler New Yorker was the favored choice. Chrysler realized this, offering the hemi V-8 New Yorker for not that much more than the six-cylinder Windsor; in 1953 the difference between the (ex-Saratoga) Windsor Deluxe and New Yorker sedans was only $550.

Chrysler tried different body mixes each year. For 1951 the Chrysler New Yorker could be ordered as a sedan, club coupe, Newport hardtop, convertible, or Town & Country wagon. For 1952, with Korean-caused production cutbacks, all but the sedan, Newport, and convertible were scrubbed.

During 1953-1954 the Chrysler New Yorker line split into a standard and Deluxe series, with a full ration of sedans, coupes, and Newports, but the wagon and long sedans came only in the standard series and the convertible only as a Deluxe. Of course, the lion's share of sales each year went to four-door sedans, and some of the production figures for other models were astonishingly low.

You can bet that Chrysler collectors are on the watch for 1951-1954 Chrysler New Yorker convertibles, though the scarcity of eight-passenger long-wheelbase sedans, wagons, and the standard 1954 Newport is worth bearing in mind if you hanker to own one of these big, hefty highway cruisers.

Check out the specifications of the 1951-1954 Chrysler New Yorker on the following page.