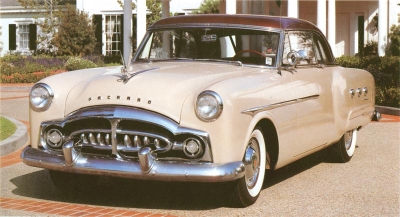 The 1951-1953 Packard Mayfair was the Packard auto company's offering in the quickly growing hardtop market of the immediate postwar era. Along with the all-steel station wagon, hardtop designs grabbed upwards of a third of domestic output by mid-decade.

The hardtop stole the show with its pizzazz, however, causing automakers to jump on the bandwagon. Some hardtops looked like deft, ground-up designs; others looked like what they were: two-door sedans with hastily contrived pillarless side windows.

The 1951-1953 Packard Mayfair was among the later arrivals, and product-wise wasn't truly satisfactory because of compromises. Packard built it on the junior short-wheelbase chassis, and attempted to sell it (and the concurrent convertible) as a prestige line. Thus it came with a "250" designation, senior-style grille teeth, 327-cid engine, full wheel covers, and pelican hood ornament.

None of this disguised the fact that at $3,200 to $3,400, the Packard Mayfair competed more with Buick, Chrysler, and Mercury than with Cadillac, Imperial, and Lincoln. It thus failed to buck up Packard's sagging luxury image, and added little to sales of middle-priced Packards.

None of which meant the 1951-1953 Packard Mayfair wasn't a nice car in its own right. All of the above deluxe components combined with the pillarless windowline did make for a sporty, upmarket Packard. "Mayfair" seemed an appropriate name, too, conjuring up images of a fashionable district in London, or a famous London coachbuilder. And the smoothly integrated styling avoided the "cobbled" look of such hastily contrived rivals as the Hudson Hollywood and DeSoto Sportsman.

Interiors of the Packard Mayfair, true to hardtop standards, sparkled with pretty combinations of nylon, vinyl, and leather, color keyed to the exterior hues. Full carpets and chrome plated pseudo-convertible top bows for the headliner also added a convertible touch. As long as one didn't equate it with the Coupe de Ville, the Packard Mayfair was a perfectly attractive proposition.

Whether it suffered by that comparison, or from its competitive market territory, the Packard Mayfair didn't sell very well. Packard didn't publish individual production figures, but careful analysis of serial numbers by Edward Ostrowski of the Packard Club divulges a minimum of 1,258 in 1951 and 3,959 in 1952. The actual 1951 figure is probably higher because Ostrowski's figures account for only 79 percent of 250 production; for 1952 his serial numbers span 95 percent of the cars.

For more on the brief but intriguing existence of the 1951-1953 Packard Mayfair, keep reading. 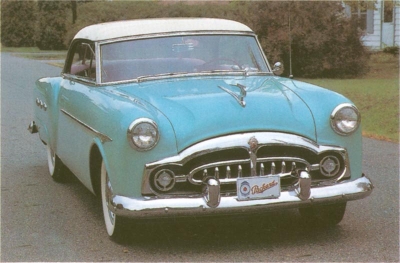 The high cost of the 1951-1953 Packard Mayfair, coupled with the public attitude toward the Packard name, doomed the Mayfair as a luxury model.
©2007 Publications International, Ltd.