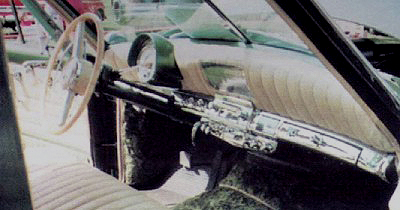 A padded dash and recessed controls were common to all Kaiser Dragons.
©2007 Publications International, Ltd.

Although Kaiser-Frazer went to great lengths to give Dragon buyers special attention, 1953 was the end of the road for the Kaiser Dragon models.

Upon retail delivery, dealers would fill out a card with the owner's name and address, which they returned to the factory. The factory then mailed an engraved medallion to the dealer for installation in place of the stock "K" symbol on the glovebox door, along with a personal letter from K-F president Edgar Kaiser "emphasizing the custom features of the car" built expressly for the owner, with congratulations for the customer's discernment.

Discerning they would have to be, because $4,000 in 1953 bought a Cadillac Coupe de Ville, a Chrysler Custom Imperial, or a Lincoln Capri convertible, all with powerful V-8s. And if you've wondered why we haven't yet mentioned specifications here, it's because under that beautiful skin, the Kaiser was plug boring: automotive vin ordinaire.

Throughout the make's 10 years. Kaisers were powered by an anemic flathead six that had started life as an industrial engine, and though the 1951-vintage chassis was superbly balanced, it was conventional in every respect. That a six-cylinder car could cost $4,000 was a major contradiction in the automotive psychology of 1953 -- and most buyers knew it.

The final debacle at Willow Run occurred during the first half of 1953, when production tapered off from 8,000 to 4,000 to 1,200 cars a month. Dragon production stopped entirely on May 28, having reached a total of only 1,277 for the model year. Still, the Kaisers refused to face the inevitable. "We are going to stay in business and make a go of it," Edgar Kaiser declared. "Willow Run is not a white elephant. It is only 73 cents a square foot and it's really the ideal place to do manufacturing." It certainly was. In fact, until recently, it built cars and transmissions -- as it had ever since Edgar sold it to General Motors in November 1953.

The Dragon is important not for its sales, but for its concepts. Together with a very few others, its designer altered our whole way of thinking about automotive interiors. With it, Carleton Spencer brought the dark, cavernous internals of the American car into the modern era of man-made fabrics and vinyls, using colors that had never been seen outside the living room.

If Carl, like Winston Churchill, is spending his first million years in heaven getting to the bottom of his favorite subject, he has by now acquired a wholly gayer palette, in which orange and vermilion are the darkest, dullest colors, with a whole range of wonderful new hues beyond to delight the celestial eye.