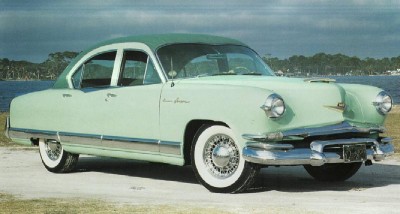 Although things didn't look good for Kaiser-Frazer, Carleton Spencer didn't give up. He was on the verge of creating the best Dragons of all -- the 1953 Dragon models.

Brochures called it a hardtop because it seemed like a good idea to use a popular term, but this was no pillarless coupe. It was just another four-door sedan, albeit spectacularly furnished. The 1953 Dragon represented the zenith of Carleton Spencer's career.

Aside from a little input from fashion designer Marie Nichols, the car was 100-percent Spencer. He had begun working with Nichols to explore the various combinations of vinyl and cloth in early 1952, and his prototypes for this model include variations of her "Laguna" cloth -- a heavy-duty Belgian linen with rectangular overlapping patterns -- and 1951-type Dinosaur vinyl, combined with mouton-like carpeting.

Later he switched from the old dino-vinyl to a pretty "Bambu" pattern that looked like a finely made bamboo curtain.

"Bambu" vinyl, another product of the L. E. Carpenter Company, was applied to the 1953 Dragon's padded top, as well as to the trunk and interior walls, door panels, package shelf, seats, padded dashboard, and even to the lining of the glovebox.

Spencer developed jade green, black, and maroon color variations. Seat inserts were Laguna cloth. Spencer chose a special long-filament "Calpoint" carpeting, which also turned up in the Kaiser-Damn sports car. The Dragon featured over 200 pounds of insulation, giving it a much quieter, heavier feel than less exalted Kaisers. A final touch was a genuine 14-carat gold finish on the hood ornament, hood and rear-deck V medallions, deck and fender scripts, and the trunklid keyhole cover.

In March 1953, the green cars were replaced by another beautiful rendition done in Maroon Velvet metallic, with a straw-colored Bambu vinyl top and maroon Bambu-and-Laguna interior. This extraordinary-looking Dragon, along with the Stardust Ivory/green Bambu combination, are the most common, while black is the scarcest. "We dropped black on Dragons because the lacquer showed the waves in the sheet metal," said Art Wrightman. The white canvas-topped model is also uncommon.

A number of show Dragons were built with yet fancier equipment. Several bore gold-anodized wire wheels (chrome wires were a $270 option on all Kaisers from early 1953) and rust-colored "Boucle" vinyl padded tops and upholstery. According to Spencer, about a dozen of these were built during April 1953, along with various other specials.

Even though Kaiser-Frazer went to great lengths to attract buyers, 1953 was the end of the road for the Kaiser Dragon models. Continue on to the next page to find out more about the final demise of the Kaiser Dragon.