The Creation of Dragon Vinyl and Golden Dragons 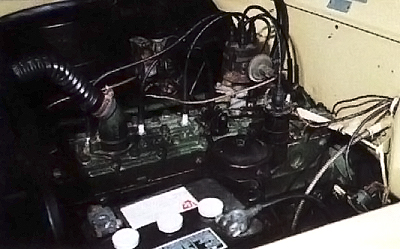 The creation of dragon vinyl and Golden Dragons set the Kaiser brand apart from the rest of the cars on the market. Read on to learn more about Spencer's creations.

Carleton Spencer was aiming for a new look -- "the luxurious look of alligator hide. You know what an alligator handbag costs. We were trying to get a soupedup vinyl that would copy it. We used the term 'Dragon' so no one would mistake it and say it was either real alligator or real lizard."

This had nothing to do with the animal-rights movement, which was then decades away, but with truth-in-advertising laws: You can't call it 'gator unless it is.

The most popular of the second-series 1951s were Golden Dragons.
©2007 Publications International, Ltd.

Incidentally, the same vinyl was used on the Kaiser Deluxe Traveler (a utility style first seen in 1949, with a rear opening hatch -- in a way, the first hatchback), which was entering showrooms at the same time. There have been rumors of two-door Kaisers with Dragon trim, but none, so far as is generally known, have turned up.

Dragon vinyl was not only good-looking, but extremely durable and nearly impervious to wear. In fact, complete "basket-case" cars have been discovered with their Dragon-vinyl seats still looking like new.

Because K-F's color nomenclature isn't obvious, a brief explanation is in order. The first Dragons off the line, as well as the one portrayed in Life, were painted Arena yellow, a bright Spencer hue. Since "yellow" had awkward connotations, it seemed natural to call the cars "golden." Subsequent examples were also painted green, coral, gray, and even Indian Ceramic, but these, too -- at least officially -- were "Golden Dragons."

Golden Dragons were sold only with certain mandatory options. Hydra-Matic transmission was apparently one, for no stickshift examples are known, and ads stated, "hydramatic (sic) of course." The cars also came with whitewall tires.

Though Dragon vinyl itself added only $125, a Golden Dragon's bottom-line price was about $2,500, which was fairly stiff for the typical customer. For that kind of money you could buy an Oldsmobile 88 hardtop, which would run rings around the six-cylinder Dragon, and was pillarless to boot. Olds didn't have Kaiser's advanced styling, but that, too, had proved a problem: People liked chrome, and many resisted the uncluttered look of the 1951 Kaisers.

After the popular 1951 model buying season, Kaiser's sales and production began to decline. To boost sales, the Worldways Cars were introduced. Continue on to the next page to learn more about these uniquely designed models.