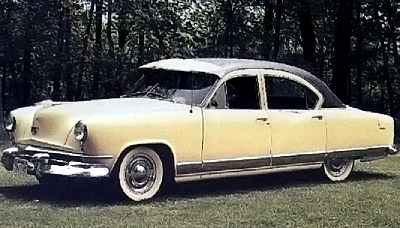 The redesigned 1951 Kaiser car, with the help of Howard "Dutch" Darrin, Duncan McRae, Herb Weissinger, Buzz Grisinger, and Alex Tremulis, resulted in one of the most daringly predictive cars since the war -- years ahead in many areas, with acres of glass, smooth integrated lines, and minimal brightwork.

Unlike earlier Kaiser-Frazer products, the redesigned 1951 Kaisers came with two or four doors, but Spencer's original problem remained: There just wasn't much visual difference between the various models. Also, there was still only one six-cylinder engine, and no hardtop, convertible, or station wagon. (Kaiser-Frazer contemplated all three, as well as a V-8, but never had the money for production). So Carl got busy again.

The Dragons were announced in a November 17, 1950, dealer bulletin from Kaiser-Frazer general sales manager Steve Girard: "We are pleased to announce the availability of Kaiser Deluxe four-door sedans in striking and entirely new interior trims as a special attraction and sales stimulant during the Christmas Season. These new Golden Dragon Kaisers are featured in a striking double page ad in Life, December 11. . . . [They] are the result of demand from distributors and dealers who, walking through the Courtesy Garage here at Willow Run, were immediately attracted by the beauty and utility of a specially trimmed Kaiser Deluxe. Invariably the reaction was, 'What kind of trim is that?' and 'How soon can I get some?'"

The answers turned out to be: "Dragon vinyl" and "pretty damn quick." That's because Kaiser-Frazer would sell you anything. "If we didn't have what you wanted, we'd make it for you," is how Spencer remembered things.

Working with the L. E. Carpenter Company of Boonton, New Jersey, Spencer had developed a unique, heavy-duty "Dragon" vinyl made by low-pressure refrigerated embossing. Smooth vinyl sheets were heated before being fed into a machine with refrigerated plates carrying the reptilian die Design. The die "kissed" the vinyl, causing the design to set through heat transfer.

Continue to the next page to learn more about he creation of dragon vinyl and the Golden Dragon model.