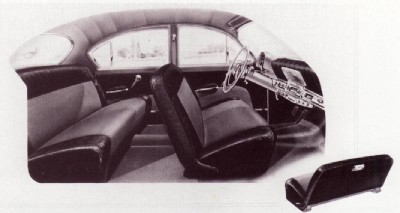 The introduction of the 1951 and 1953 Kaiser Dragon models introduced the public to cars with unique colors and textures.

Where others at Kaiser-Frazer may have seen just another car in the redesigned 1951 Kaisers, Carleton Spencer saw a high-fashion model worthy of being dressed to the nines in wonderful colors and intriguing new textures.

Carleton Spencer invented the Kaiser Dragon, a marketplace flop. No one is sure about the number produced: about 1,600 at the outside over two model years, 1951 and 1953. But this rare and fascinating failure was a pioneer in automotive color and trim. Had General Motors invented it, the Dragon would probably be with us yet as some jelly-bean-shaped luxury sedan with fake lizardskin upholstery.

Initially set up by car people, Kaiser-Frazer was soon taken over by Henry J. Kaiser's West Coast construction boffins, who wrecked it. They had a hundred new ideas a day, of which three on average were good. Fortunately for history, one of their good ideas was to hire Carleton Spencer, and his idea was to bring new patterns and colors to the automobile interior. The Dragon was his masterwork.

Spencer reported to the bustling Kaiser-Frazer complex at Willow Run, Michigan, 20 miles from Detroit, after he was discharged from the Army in autumn 1946. His prewar background-included blueprint drawing at Fisher Body and color coordinating at the Ditzler Paint Division of Pittsburgh Plate Glass.

In 1939-1940, he edited an industry publication. Colors and Contours, a compendium of new styling ideas and trends among car manufacturers. A man of impeccable taste and judgment. Spencer was an easy person to like, and he got along well with all the various warring tribes he found at Kaiser-Frazer. In the styling business, where egos run rampant, men like Spencer are rare birds.

The first thing Spencer did at Kaiser-Frazer was to survey what women liked, a novel notion at the time. Except for the far-sighted Ned Jordan, no one in the auto industry had much wondered about this before. The results of Spencer's survey correlated closely with a similar study for House and Garden, so he worked with that magazine to develop materials and colors suitable in both house and car.

For example, what Kaiser-Frazer called "Indian Ceramic," an extraordinarily bright puce-pink paint recalling Native American pottery, was identical to a household finish that House and Garden called "Flame." For 1949, Spencer even had paint-color names written in chrome on the sides of each Kaiser Deluxe. Thus, almost inevitably, did one automotive publication recently refer to a "1949 Kaiser Indian Ceramic."

Spencer's talent was crucial to Kaiser-Frazer. "We didn't have a bunch of different engines, or a whole lot of the things they have today to make cars different, like 27 different models," he said in 1972. "We had only one basic body.... Color and trim was where we had to achieve a difference." His first production effort was the elaborately trimmed Frazer Manhattan, swathed in beautiful contrasting broadcloth. The Manhattan later was cited by the Milestone Car Society for introducing revolutionary new colors and fabrics to the automotive interior. Less well known but significant is the fact that early Manhattans were offered in different series of seasonal colors and trims -- darker ones for winter, bright pastels for summer. Not until years later did the rest of the industry begin catching onto this practice (as, for example, Chrysler's "Spring Specials").

The redesigned 1951 Kaiser Dragon offered many different colors and textures. Continue on to the next page to learn more about these interesting cars.