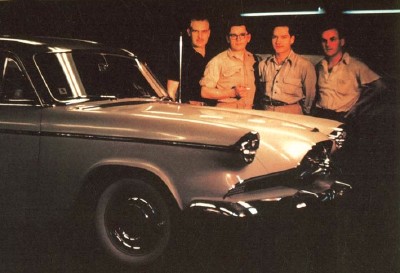 Image Gallery: Concept Cars Pictured in 1953 is the Grisinger-Miller design team and its effective facelift on the then-new Aero-Willys. The team hoped for a 1955 or 1956 introduction. See more concept car pictures.
©2007 Publications International, Ltd.

The 1950s Willys concept cars were meant to create excitement for the declining Willys corporation. They couldn't prevent the company's demise in the U.S., but they did lead to unexpected success in South America.

The Aero-Willys wasn't America's first postwar compact, but it was arguably the best. Besides an impeccable pedigree-engineered by the distinguished Clyde Paton, formerly of Packard; styled by the inventive Phil Wright, creator of the beautiful 1933 Pierce Silver Arrow -- the Aero was roomier than Nash's pioneering Rambler, faster than the Henry J, as solid as Hudson's Jet, and better-Looking than any of them.

With all this, the debut 1952 Aeros sold quite well. Then Kaiser Motors Corporation bought Willys-Overland, and the Aero went to the same wall as the Kaiser. The writing on that wall was plain: a dwindling, demoralized dealer body; a doubtful public fearful of being stuck with orphans; an undeserved reputation for poor reliability. Thus did Willys build its final U.S. cars for 1955 (as did Kaiser).

A closeup of the shapely new front end of the Aero-Willys concept car.
©2007 Publications International, Ltd.

Like other failed automakers, Willys left behind many plans for future models. Happily, these have survived in photographs and written records. They've suggested that American buyers missed out on some of Willys's best ideas.

The first was an Aero station wagon that would have bowed for 1955 had Willys remained independent for 1956 as first projected by Kaiser. And it would have been a hardtop wagon without B-posts, not a pillared pseudo-hardtop like Chevy's new-for-1955 Nomad.

C-posts were gracefully curved, while the roof extended slightly past a roll-down tailgate window framed by slim D-pillars. Styling below the beltline was pure stock Aero. Had it come off, Willys would have beaten General Motors -- though maybe not American Motors -- to hardtop wagons, but the notion evidently went no further than a single 3/8-scale clay model.

Slated to debut a bit later was an ultra-sleek Aero-based hardtop, a likely replacement for the original Eagle/Bermuda. Only one illustration of this design has been found. It shows projectile-like front fenders with deeply "frenched" headlamps, plus a low hood, lots of glass, and a well-formed overall shape. This car would have been as stunning in its day as Studebaker's 1953 "Loewy coupes," but it was a long-shot with no real hope.

The Willys were redesigned in order to create excitement and boost sales. Continue on to the next page to learn more about the new designs. 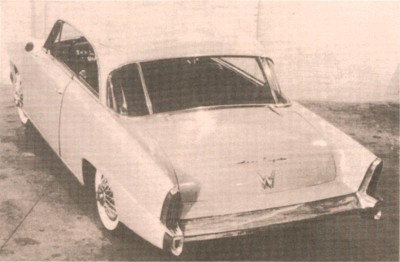 After purchasing Willys, Kaiser focused on redesigning the Aero-Willys concept cars in 1953.

Two designers figured prominently in Willys's last days as a carmaker: former Kaiser-Frazer designer Buzz Grisinger and the redoubtable Howard A. "Dutch" Darrin. After completing design work on the 1954 Kaiser, Grisinger left K-F to form a partnership consulting firm with Rhys Miller. They submitted an entry for the Continental Mark II project, and then in 1953 turned their attention to redesigning the Aero-Willys.

The two worked in a separate, or "secret," area in K-F's Willow Run, Michigan, plant, away from other Willys proposals: Grisinger did most of the front-end work, Miller the rear end.

A major proposed facelift on the existing Willys bodyshell resulted, but using all-new sheetmetal front and rear. A simple side molding just below the beltline swept unbroken from hooded headlamps to the rear fenders, where it crowned inset taillights.

One side of a two-sided early scale clay model of the redesigned Aero-Willys concept car.
©2007 Publications International, Ltd.

The hood was both downsloped and prominently domed to meet a forward-leaning, mesh-filled grille wearing a prominent three-pointed "spinner"; the grille spilled down to a slim full-width lower section sporting a hidden parking lamp at each end.

A slim wraparound bumper completed an ensemble that blended looks from Studebakers past and future: the 1950-1951 "bullet nose" and Raymond Loewy's 1956 Hawk.

Another Aero facelift was crafted by Dutch Darrin, then working as a freelancer. Essentially it crossed the Henry J with his 1954 Kaiser-Darrin sports car -- likely on purpose.

Acquiring Willys had made the Aero an intramural rival to Kaiser's own compact, so Dutch may have been trying to harmonize the two (though fast-falling sales prompted Kaiser to give up on the Henry J after 1954).

Here, it was the rear end that owed something to contemporary Studebakers, with a deck sloped down between enlongated fenders carrying vertical taillamps above a prominent bumper. Up front was a shell-shaped "rosebud" grille not unlike that of the short-lived sports car, while the Henry J was echoed in front wheel wells surrounded by similar elliptical "speed lines."

Circa 1955 was this near-final workout for the rebodied Brazilian Aero that would see production in 1963 as the Willys 2600.
©2007 Publications International, Ltd.

Intriguingly, Darrin nestled an exhaust port in each end of the rear bumper, as on period Cadillacs. This suggests that a V-8 or at least a hotter Aero six was being contemplated. But though Kaiser had worked on a V-8, it never managed to offer one in its own cars or any Willys. A shame, for a V-8 would probably have turned the already sprightly Aero into quite a bomb.

Even though a great effort was put forth to keep the company successful, Aero-Willys stopped production in the U.S., and found new life in Brazil. Continue on to the next page to see photos and learn more.

The End of Aero-Willys in the U.S.

The 1950s Willys concept cars led to this restyled Aero-Willys 2600, which was introduced to Brazil in 1963. The small sedan was a South American sales success.
©2007 Publications International, Ltd.

Early 1955 was the end of Aero-Willys in the U.S. Kaiser decided to stop production. However, the company found renewed life in Brazil.

Given the industry's then-usual three-year lead times for getting new designs production-ready, both Darrin and Grisinger likely targeted their facelifts for 1956, certainly no earlier than 1955.

Neither restyle would have been particularly expensive or difficult to tool. But in the end, there was no reason to push ahead with anything. In early 1955, Kaiser decided to give up building cars in the U.S. and to cast its fate with Jeep vehicles, which even then were spinning money as they do today.

But just as Kaiser found renewed life in Argentina (as the Carabela), the Aero-Willys found haven of its own -- in Brazil. Built by another Kaiser subsidiary, Willys do Brasil, it carried on through 1962 as a cleaned-up 1955 four-door sedan with Willys's old low-compression F-head six (to suit Brazil's very low-octane gasoline) and a strengthened structure (to cope with the country's poorer roads).

In Brazil, production of the Willys 2600 lasted through 1972, by which time the Aero's basic engineering was 20 years old.
©2007 Publications International, Ltd.

For 1963, famed Milwaukee-based designer Brooks Stevens applied handsome new square-rigged outer panels, and the car continued with few other changes all the way through 1972, first as the Aero-Willys 2600, then the Willys Itamaraty, and finally as the Ford Itamaraty (Dearborn having acquired Willys do Brasil via American Motors in 1967).

That's eloquent testimony to the Aero's sound original design. A shame it wasn't further evolved -- or more appreciated -- in its native land.