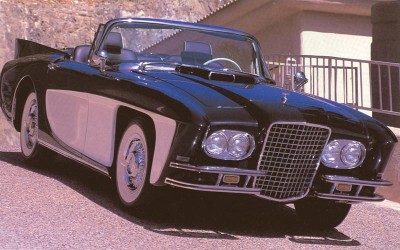 The elegant 1950s Gaylord concept cars were born when the end of World War II promised prosperity unknown to Americans since before the Great Depression.

That promise was realized to a degree sufficient to encourage a good many dreamers and millionaires -- not always one and the same -- to try their hands at the car business. Most came up with pretty absurd results, confirming the view of Road & Track magazine founder John R. Bond that a little knowledge about cars can be right dangerous.

Brothers Jim and Ed Gaylord were different -- rich to be sure, but devoted enthusiasts and serious about cars. Their father, who had invented the bobby pin and been smart enough to patent it, thus assuring the family fortune, had owned Marmons, Lincolns, Packards, and Pierce-Arrows. His sons grew up hot-rodding Packards, Cadillacs, and LaSalles.

Speed engineer Andy Granatelli once built a Packard for Ed Gaylord that was the fastest thing on wheels in late-1940s Chicago, and the police had the records to prove it. The brothers were also personal friends of Ed Cole, the master General Motors engineer, and spent many hours examining that company's latest experiments.

Jim Gaylord was the more visionary of the brothers, and in 1949 he met with Alex Tremulis, then finishing up as styling chief for the troubled, short-lived Tucker Corporation in Chicago. Tremulis recalled that Gaylord had just stopped by to talk cars, but the conversation ran long into the night.

The first Gaylord concept car bowed in 1955 as a modern sports car with classic touches. It was styled by industrial designer Brooks Stevens.
©2007 Publications International, Ltd.

Five years later, Tremulis was working at Ford when Gaylord dropped by again. "Alex, I'm going to build the world's finest sports car," he declared, "and you're going to style it for me."

What Gaylord wanted was a modern two-seat envelope body with classic overtones -- namely an upright radiator and big headlights -- plus a 100-inch wheelbase and even a retractable hardtop. Via several prior projects, Stevens had developed a respect for the Spohn works in Ravensburg, West Germany, and suggested that the prototype be built by that firm. Introduction was slated for the 1955 Paris Auto Salon.

Learn about the two iterations of the Gaylords' car by continuing to the next page.

Brothers Jim and Ed Gaylord, in a quest for the ultimate sports car, commissioned the famed Brooks Stevens for the 1950s Gaylord concept cars design. Stevens was an industrial designer, and the brothers asked him to build the first of their Gaylord concept cars for the 1955 Paris Auto Salon. His prototype was hastily completed and arrived just in time.

A garish, finned affair with de rigeur wrapped windshield, it carried a vertical grille opening reminiscent of the Classics of the 1930s. The grille was flanked by two huge headlights of the sort one would expect to see on a prewar Rolls-Royce, but in a front that was thrust rakishly forward at the top. Front fenders were angled to match, and were also cut back around the front wheels to leave them fully exposed.

A contrast-color panel swept back from the fender hollows to the bottom and trailing edges of the doors, an effect Stevens called the "Washington Coach Door Line." This was finished in ivory to contrast with the black used elsewhere -- Stevens' favorite color scheme.

The rear end was topped by moderately tall fins, which were coming into fashion when the car was designed. Taillights were nestled into chrome bezels that capped the ends of the fins. Vertically ridged bright trim suggested rear grillework, which housed additional rear lights.

Though it was better-looking overall, the rear end of the 1957 Gaylord concept was fairly similar to that of the original 1955 concept.
©2007 Publications International, Ltd.

A second, somewhat cleaner-looking car was soon constructed with smaller headlights but conventional fenders instead of the cutaway type. The biggest change in the rear was that the rear bumper had disappeared; in its place was a two-piece bumper that housed the exhaust outlets and left the entire center section of the car vulnerable.

A retractable hardtop was again on hand per Jim's instruction, with a recessed rear window and integral air-extractor vents, thus pioneering "flow-through" ventilation.

At the touch of a button, the rear deck lifted and a chain drive pulled the top back into the trunk. In this, the Gaylord was a full year ahead of Ford's 1957-59 Skyliner, which was considerably more complicated.

A retractable hardtop, shown here on the 1957 concept, was one of the Gaylord concept cars' most striking features.
©2007 Publications International, Ltd.

The chassis was Jim Gaylord's own design, a strong chromemoly tube type with coil springs and A-arms in front and a beam axle on leaf springs at the rear, all very well damped.

The first prototype carried a 331-cubic-inch Chrysler Hemi, but Cadillac V-8s were installed in two later cars (which also had full front fenders) as well as in one unibodied chassis. The chosen transmission was GM Hydra-Matic, modified so that full-throttle automatic upshifts came at peak revs.

To find out why the Gaylord, with all of this going for it, never came to fruition, continue to the next page. 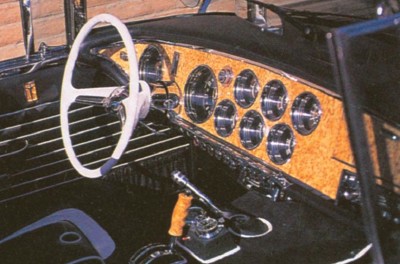