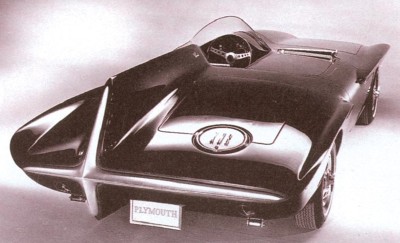 The 1960 Plymouth XNR concept car borrowed a cue from Jaguar race cars and put a tailfin behind the driver. A hard tonneau covers the passenger seat.
©2007 Publications International, Ltd.

While Ford's Falcon was running away with the compact-car market, Exner was transforming Chrysler's compact, the Plymouth Valiant, into his most radical idea car of all, the 1960 Plymouth XNR concept car. (Say the initials quickly.)

Representing the peak of his enthusiasm as head of Chrysler design, its imaginative "Asymmetrical Styling" was bold, to say the least -- especially for a Plymouth. The car was likely intended to be a preview of the similar but far more subtle styling then being planned for Chrysler's 1962 showroom models.

The car could seat two, but was best suited for a single occupant, the driver.

Thus the huge port-side headrest-cum-tailfin, which was intended to emphasize the driver while harkening back to late-1950s racing-car design, exemplified by the likes of Jaguar's D-Type and XKSS.

The driver sat behind a dramatically curved "personal" windshield; a smaller, fold-own windscreen was available for the protection of a passenger. Additionally, the passenger sat somewhat lower than the driver -- a design touch intended to minimize the negative effects of the wind.

The frame of the XNR's grille was constructed of heavy-duty materials and doubled as the car's front bumper. The "X-motif" rear bumper was a visual reminder of the car's name and essentially asymmetric nature.

Quad headlamps nestled in a big mesh-filled bumper/grille roughly oval in shape. The passenger seat was normally covered by a metal tonneau, but a small fold-flat auxiliary windshield was provided should a co-pilot be aboard.

The interior was finished in black leather and aluminum. Of the car, Exner remarked he was "striving to avoid the static and bulky, which is ugly and not what an automobile should look like. The goal is to try for the graceful look, with a built-in feeling of motion. The wedge shape expresses the function of automobiles because it imparts a sense of direction."

What excited sports-car fans -- and prompted rumors of imminent sale -- was the XNR's engine. Power came from the hairiest version ever developed of Valiant's 225 Slant Six, which pumped out 250 horsepower -- 1.11 horses per cubic inch.

"We took [XNR] to the Proving Grounds and had a professional drive it," Exner said later. "He lapped at 151 or 152, which wasn't bad for that time."

As a production sports car the XNR would have been unique; in racing guise it would likely have trimmed most anything in its displacement class.

The XNR featured a prominent offset hood scoop faired back into the cowl, which was topped by a squat, racer-style windscreen.
©2007 Publications International, Ltd.

But again, Chrysler decided there was just no market; even if there had been the styling would likely have seemed just too far out to sell well. Finally, Exner's abrupt firing in 1962 killed any chance the design might have had for being refined into something more practical for production.

Incidentally, the XNR was one Exner special not built by Ghia, though the Italian coachbuilder did manage something similar on its own a bit later. Alas, its Valiant Assimetrica had none of the XNR's flair, and never went beyond the one-off stage.