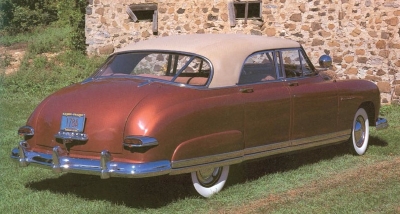 One of Kaiser-Frazer's legacies to the industry was its novel hardtop, the 1950 Kaiser Virginian, patterned after the unique K-F convertibles and personifying "The Southern Spirit of Pride and Importance," according to sales brochures. (Incidentally, Kaiser's beautiful, oversize parchment broadsides won an advertising design award and are highly valued today.)

Though the 1950 Kaiser Virginian was unique, "hardtop convertibles" were not new -- the first attachment of a solid top to an open body dates at least back to the Kissel "All Year Top" of 1915-1921, though the first hardtop in the modern sense was built experimentally by Chrysler in 1946. Seven production Town & Country convertibles received steel roofs skinned from Chrysler club coupes, bolted on for "evaluation."

By 1948, General Motors was putting the finishing touches on the Cadillac Coupe de Ville, Oldsmobile Holiday, and Buick Riviera. But the Chrysler version never made it into production, and the GM hardtops weren't offered until mid-1949, whereas the Kaiser Virginian made its entrance on February 23rd of the same year. And -- salesmen thought this most important -- the Virginian had four doors.

The 1950 Kaiser Virginian was simple in concept, though semanticists dispute the hardtop claim, since the side window frames were fixed and the little vertical pane of glass between them prevented an unobstructed, all-windows-down effect.

Like the Town & Country, the 1950 Kaiser Virginian carried a steel top coupled to a convertible body, lighter than that of the ordinary sedans and strengthened by crease lines designed to resemble convertible top bows. Padded nylon or cotton was applied over the roof to complete the convertible look -- a painted top was listed as a reverse option, but no such Virginians have been found. The car actually bore "Hardtop" script on its flanks before the name was settled.

This "blueblood of all cars" was the subject of fascination to Kaiser-Frazer fabric expert Carleton Spencer, who created a variety of special color combinations and upholstery materials -- at least 54, according to factory records.

Spencer even produced a "Custom Virginian" in low quantity for the first several months, with interior combinations of Stockholm and Volta cloth and mouton-like Imperial Crush floor and lower door panel carpeting. The custom 1950 Kaiser Virginian sold for $200 more than the standard model. Spencer put the production of this variant at fewer than 100 units.

Learn how Kaiser marketed its unique 1950 Kaiser Virginian on the next page. 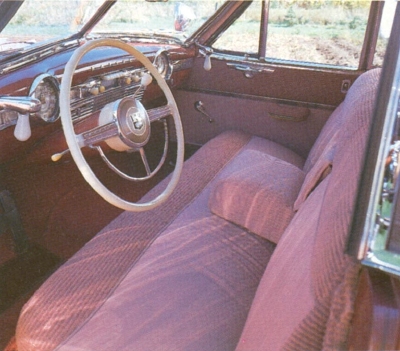 The 1950 Kaiser Virginian could lay claim to being the first production convertible hardtop, but it wasn't quite a true hardtop because the glass post between the doors was fixed.
©2007 Publications International, Ltd.