With its unit body-chassis surrounded by girders, the 1950 Hudson Commodore was the safest car of its day.
©2007 Publications International, Ltd.

While the 1950 Hudson Commodore Eight's engine dated back to the 1932 "Greater Eight," it had been improved through the years, going from 101 to its final 128 horsepower. By the time it made its last appearance, in 1952, it had achieved a reputation for smoothness and reliability, running through five main bearings and ample water jackets. It was as good an inline eight as the industry ever developed.

The alternative six, which cost $84 less on comparable 1950 Hudson Commodore bodies, was perhaps more interesting. Violating an old Detroit rule about restyling and reengineering the same year, Hudson had brought this 262-cubic-inch L-head out in 1948 with the new Step-down body.

By 1950, the Hudson Commodore six developed 123 horsepower, only five less than the eight (some say it was deliberately under-rated so as not to embarrass the eight). Although it had only four main bearings, it was also a smooth and durable engine. In 1951 it evolved into the memorable Hornet engine.

Drive-Master was a semi-automatic that eliminated both clutch and gear lever motion on the 1950 Hudson Commodore: the driver would place the shift lever into "High" and accelerate in a low gear, lifting his or her foot when the shift to High was desired (or at a preset 22 mph when a dashboard button was pressed). Supermatic added a high cruising gear.

Also, there was one flaw in the Hudson formula, and in the end it would prove crucial: the handsome Step-down was difficult to face-lift for the then-mandatory annual model change, and almost impossible to seriously restyle. Also, Hudson lacked the financial resources to construct variant bodies for its 1950 Hudson Commodore line -- the lack of a station wagon was an increasing problem to Hudson dealers in the early 1950s.

All Hudson had were closed two-doors and four-doors -- and the convertible, itself carved out of a coupe. Thus the ragtop's characteristic huge steel header, really the chopped-off coupe roof, was left there to save tooling money. Hudson made a virtue of this necessity by claiming, correctly, that 1950 Hudson Commodore offered more protection in the event of a rollover -- although the low-slung Step-down was almost impossible to roll anyway! In this respect it was doubly safe.

Check out the specifications of the 1950 Hudson Commodore on the next page. 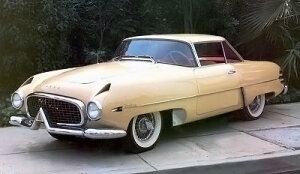 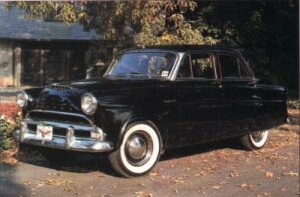