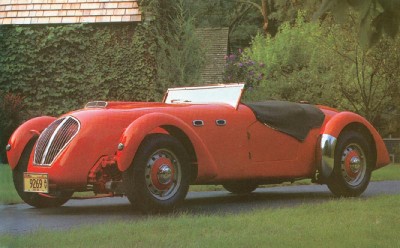 The 1950 Healey Silverstone had the benefit of Donald Healey's experience as a driver. See more classic car pictures.
PIL

Before the Nash-Healey and Austin-Healey, or even the 1950 Healey Silverstone, there were simply Healeys, sporting cars designed and built by Donald Healey from 1946-1954.

Healey had made his mark in the 1920s as an ace rally driver. In the 1930s, he was technical chief for Triumph; he also helped Riley and Invicta win contests like the famed Monte Carlo Rally. By 1946, he was ready to fulfill a long-held dream of building cars under his own name, and set up a small shop in Warwick, a few miles south of Coventry, Britain's automotive center.

The Healey was conceived during World War II on the premise that since the Healey family had virtually no money for tooling, the car would be composed almost entirely of components from established manufacturers. Healey thus bought engines and gearboxes, but did manage his own chassis and suspension.

The 1950 Healey Silverstone had a sleek yet rugged streamlined shape.
PIL

All cars built at Warwick (Nash-Healey included) rode a sturdy, box-section platform with a 96-inch wheelbase and an odd trailing-arm front suspension inspired by the 1930s Auto-Union and ERA single-seat racers.

Bodies were farmed out to the few coachbuilders active in postwar Britain. The coming years saw four-seat coupes by Elliot, Duncan, and Tickford; convertibles by Westland and Abbott; and a true sports car named for Britain's then-new Grand Prix track: Silverstone.

The 1950 Healey Silverstone was powered by a 2.5 liter four-cylinder engine.
PIL

The comfortable interior of the 1950 Healey Silverstone made driving a pleasure.
PIL

As a dual-purpose "race-and-ride" sports car, the Silverstone was designed to be light, simple, and functional. Thus, weather protection was rudimentary, while the spare tire was mounted in the tail and jutted out to do double duty as the rear bumper. And at about 2,100 pounds, the Silverstone weighed 400-500 pounds less than other Healeys, which contributed to its success in competition.

Because they were assembled mostly by hand, Healeys were expensive. Bodies tended to decay rather quickly in hot, damp climates, but the chassis and running gear proved strong and durable. In performance they were more than a match for most rivals, especially the Silverstone, which could top 110 mph and zip from 0-60 in 11 seconds.

Only 105 of these rare collectibles were ever made.
PIL

The Silverstone is the Healey with the most appeal today. Unlike some specialty cars of the period, the early Healeys sold in fairly high numbers. A total of 781 were built in less than eight years -- but only 105 of them were Silverstones. A pity, since today's demand far outstrips the supply.