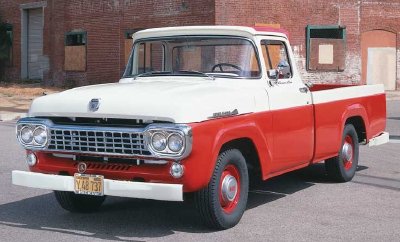 Although the major 1958 news stories at Ford Motor Company were the introduction of the ill-fated Edsel and a more successful four-passenger replacement for the two-seat Thunderbird, 1958 Ford trucks got some changes as well.

Like their automotive counterparts, nearly all Ford trucks were restyled to accommodate quad headlights. But the big change -- literally -- was a new line of heavier-duty model trucks called Super Duty, which came equipped with new V-8 engines of up to a whopping 534 cubic inches.

Like most other vehicle manufacturers, Ford switched to quad headlights for 1958, applying them to both cars and trucks. For the F-Series trucks, that meant a restyled grille -- which they had been getting every year anyway.

By this time, interiors were beginning to show some style themselves, with contoured dashboards and car-like instrument panels.

The Ford Ranchero returned for 1958 with a whole new face, necessitated in part by the move to quad headlights. With the change came a massive, fancier grille topped by a small hood scoop. Ford advertised the Ranchero as a truck for both work and play.

Big power was the big news for Ford's 1958 Extra Heavy Duty truck line. New V-8 engines up to a whopping 534 cubic inches were offered, far outpowering the previous year's engines. These trucks' GVWs rose to as much as 36,000 lbs on the F-Series and up to 51,000 lbs on the tandem-axle T-Series.

Of more importance to tractor-trailer operators were the Ford Extra Heavy Duty trucks' Gross Combined Weight (GCW) ratings of 65,000 lbs with a single rear axle and 75,000 with a tandem axle.

The factory-made 4x4s Ford would introduce in 1959 changed the truck business significantly, and Ford hit a production milestone as the decade closed. Learn more on the next page.