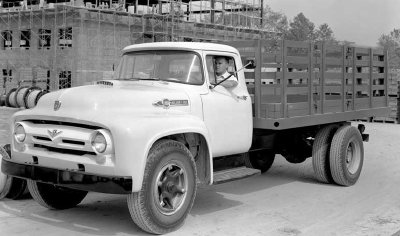 Ford's nearly singular focus on its cars changed for 1956, at least to a degree. This year Ford gave its trucks a wraparound windshield that provided a fresh look. Tubeless-tire availability expanded to include Ford F-250-and-up trucks, and larger V-8 engines were offered on several models.

Also in 1956, the Federal Highway Act authorized the building of the 41,000-mile Interstate Highway System, which would become a boon to both drivers and -- more immediately -- construction companies.

Ford offered larger V-8 engines for trucks in 1956, with a 302-cubic-inch version available in heavy-duty trucks like this F-750 Stake Bed.

The lineup of 1956 Ford trucks extends from F-100 pickup truck and panel truck at right, through the heavy-duty conventionals, all the way to Big Job cab-forwards.

In an effort to match the redesigned Chevrolet trucks that had appeared for 1955, Ford attempted to modernize its F-Series trucks by giving them wraparound windshields and restyled dashboards.

Ford's 1956 truck grilles got the customary annual update, and now boasted a "Back to the Future" look very similar to that of the 1953 Ford truck models.

Ford added a new type of vehicle to its truck lineup in 1957: the Ranchero. Get details and see photos on the next page.