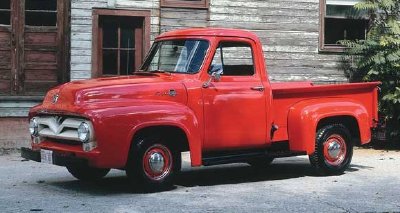 Most of the news coming out of Ford Motor Company in 1955 centered on the redesigned car line and the introduction of a new sporty personal car named Thunderbird. As for trucks, changes were kept to a minimum, with little to note besides revised grille and exterior trim pieces.

Yet another change to grille design differentiated the 1955 Ford trucks from the 1954s. The vertical guards were dropped in favor of a V-shaped dip in the upper bar, which again carried an indicator of a six-cylinder or V-8 engine. Less obvious were the switch to tubeless tires on F-100s and the newly optional power brakes.

Despite all the emphasis placed on exterior styling over the years, such as the snazzy logo on the 1955 Ford F-100 truck shown above, interiors had gained little in the way of "character" by that time (see below).

Wraparound windshields and larger engines aimed to give Ford trucks a competitive edge in 1956. See photos of this new look on the next page.