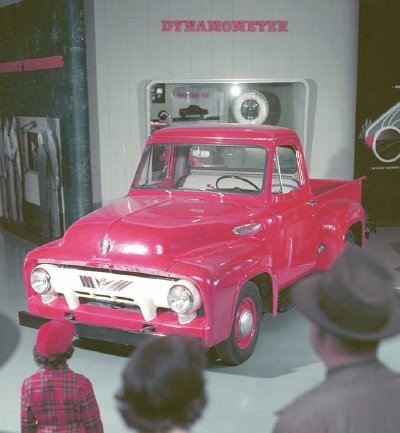 The 1954 model year brought the end of Ford's famous flathead V-8 engine, replaced in trucks that year by the overhead-valve V-8 already two years old in Ford's car line. Referred to as the "Y-Block" engine, it displaced the same 239 cubic inches as the flathead, but produced nearly 15 percent more horsepower.

Another first for Ford trucks in 1954 was the availability of tandem rear-axle setups for heavy-duty work. Ford referred to these trucks as the T-700 and T-800 models. Ford also added a couple of heavy-duty Cab-Over-Engine models in the form of the C-700 and C-900. Also that year, availability of the automatic-transmission option was expanded to include F-250 and F-350 trucks.

Another grille change marked Ford's 1954 trucks, this time adding a pair of prominent vertical guards. The V-8 badge on the grille indicates this pickup has Ford's new overhead-valve V-8. At 239 cubic inches, displacement was the same as the flathead's, but horsepower rose from 110 to 130.

Ford had introduced a pair of tandem-rear-axle models in 1953, the T-700 and T-800. Previously, buyers wanting a tandem-axle chassis had to have it built using an aftermarket conversion kit.

Ford expanded availability of the optional automatic transmission for 1954, offering it for F-250 and F-350 trucks in addition to the F-100s.

A cross in the center of this restored 1954 Ford F-100's grille (above) indicates that the truck carries the revised six-cylinder engine Ford issued for 1954. A bore increase brought it up to 223 cubic inches and 115 horsepower from 215 cid/101 hp.

The six chrome hash marks that flank the cross indicate this is a Deluxe model, which had fancier trim. Adopted with the 1953 redesign (and featured on this vehicle) was a new hood badge featuring a lightning-bolt/gear-wheel motif below the famous Ford script.

At right is a look at the not-so-deluxe inside of this deluxe Ford pickup truck.

Most of Ford's 1955 attention focused on cars, but designers did find time to remake the Ford truck grilles once again. See the results in the next section.