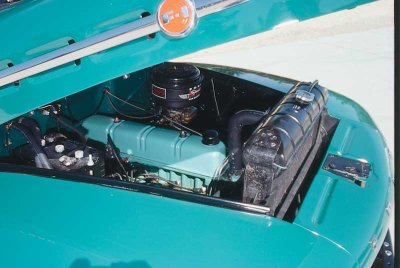 Ford introduced new overhead-valve (OHV) engines for 1952, but not all made it to the truck line -- at least, not yet. The first new OHV engine, a six-cylinder displacing 215 cubic inches, was available in Ford trucks from the F-1 through the F-5, as well as in Ford cars.

The second new Ford OHV engine was a large V-8 based on a new Lincoln engine that was offered in 279- or 317-cubic-inch variations, but it was only available in the big Ford F-7 and F-8 truck models; smaller trucks still used the old flathead V-8.

Ford truck styling was altered little for 1952, with the most noticeable change affecting the nose and side trim on the trucks' hoods. Beneath the hood was a different story, however, as a new six-cylinder engine boasting overhead valves was introduced. Sized at 215 cubic inches, it produced 101 horsepower, six more than the 226-cid flathead six it replaced. The flathead V-8 continued to be used in Ford pickups as before, although cars and heavy-duty trucks offered overhead-valve V-8s.

Marmon-Harrington had long been offering four-wheel-drive conversions for Ford trucks. When a 1952 Ford Panel Delivery truck was so equipped, it was called a "Ranger."

In the next section, learn how Ford celebrated its Golden Anniversary with new truck designs.