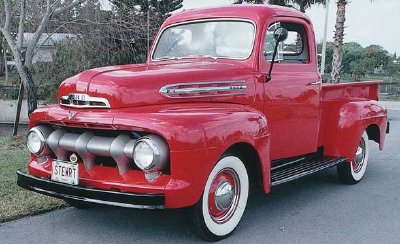 Ford trucks received a number of revisions for 1951. Restyled for the first time since their 1948 debut, Ford's F-Series conventionals and C-Series Cab-Over-Engine trucks received modified front fenders, grille cavity, and grille. Also changed were the hoods and cabs, along with the dashboard and rear window, which was now substantially larger for better visibility.

Also for 1951 -- and for the first time since the late 1930s -- Ford offered truck buyers two levels of cab trim: the standard Five Star Cab and the deluxe Five Star Extra Cab. The latter came with such niceties as foam seat padding, extra sound-deadening material, bright metal trim around the windshield and vent windows, an argent-finished grille bar, locks and armrests on both doors, two-toned seat upholstery, a dome light, and twin horns.

Resplendent in its cherry-red paint, whitewall tires, and chrome trim, this restored 1951 Ford F-1 truck looks ready for a night on the town; most pickups of the era weren't dressed nearly as well. This truck shows off that year's new look, with revised front fascia, grille, and hood trim.

Pickup beds now had a wood floor rather than steel, and note the larger rear window that accompanied the 1951 redesign. As advertised on its nose, this truck carries Ford's 239-cubic-inch flathead V-8, still rated at 100 horsepower.

Another change for 1951 was that the F-Series designation no longer appeared on the cowl, as evidenced by this F-1 Panel Truck. Instead, it was stamped into the leading edge of the hood's side-trim "spear."

Popular with farmers, a Ford F-5 truck could be fitted with a nine- or 12-foot Stake Body.

A 1951 F-8 tractor truck hauls a trailer load of Vernor's ginger ale. It is fitted with the cast wheels and demountable rims newly available that year.

Another Ford F-8 tractor truck sports special wheels that combine a demountable-rim feature with a standard eight-lug bolt pattern. It also has an aftermarket dual-rear-axle conversion that allowed for a higher-than-stock GVW.

In the next section, learn about the overhead-valve six- and eight-cylinder engines introduced to Ford trucks in 1952.

Ford's Extra Heavy Duty F-7 and F-8 models were called "Big Jobs," and indeed, that's what they could do. These were the only two F-Series models fitted with Ford's big 336-cubic-inch flathead V-8 engine, which was available with an exclusive five-speed transmission.

Although the F-8 carried a three-ton rating, it had a Gross Vehicle Weight (GVW) of 21,500 lbs. And some aftermarket companies offered a tandem rear suspension (a second rear axle) that allowed for even higher payloads. For tractors hauling trailers, the F-8 offered a Gross Combined Weight (GCW) of up to 39,000 lbs.