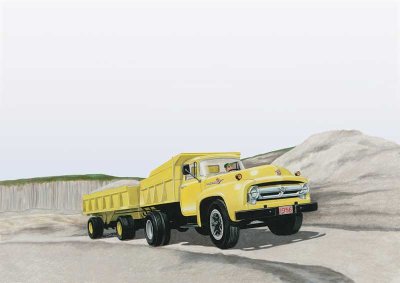 In the 1950s, Ford added trucks to its line, such as a car-truck hybrid. The style of Ford trucks changed dramatically over the course of the decade.

As flashy as Ford trucks would get in the late Fifties, those that ushered in the decade could only be described as subdued -- and little-changed from the year before. Aside from a larger "Big Six" engine for F-6 buyers who didn't want to opt for the V-8, there wasn't much new and exciting for dealers to trumpet.

Ford Motor Company celebrated its Golden Anniversary in 1953 by introducing a totally redesigned line of F-Series trucks. The company also took this opportunity to change its model designations, adding "00" to the end of the existing monikers. Thus the F-1 became the F-100, and so on -- the nomenclature still used today. Added at the top of the line was a new heavy-duty model called the F-900.

Instead of calling these trucks the "Bonus Built" models, as they had been from 1948 to1952, Ford now referred to them as the "Economy Truck Line." Joining the new name was a new hood emblem: a gear cog bisected by a lightning bolt below the Ford script. And for the first time in Ford-truck history, an automatic transmission was offered as an option, though initially only on F-100s.

The biggest news in the middle of the decade was the new car-truck hybrid called the Ranchero. Based on a two-door station-wagon platform, it combined Ford's new-for-'57 car styling with the utility of a pickup by replacing the wagon's covered cargo area with an open bed.

In 1959, Ford celebrated a production milestone when its 50-millionth car -- a Galaxie hardtop -- left a company assembly plant. Ford cars outsold those of rival Chevrolet that year, putting a finishing touch on what had been an exciting decade.

See some great photos of Ford trucks in this article. In the next section, learn about the changes in the F-1 redesign for 1950.