Anyone born after 1960 may find this hard to believe, but there was a time when hardtops like the 1950-1952 Pontiac Catalina were quite exotic. That time, of course, harks back to 1949, when General Motors pioneered the pillarless idea with a trio of low-volume "hardtop convertibles."

To enhance their allure, product planners looked to faraway places with strange-sounding names. Thus did Buick offer a Riviera, named after the famed French and Italian coastlines, and Cadillac the Gallic-sounding Coupe de Ville. Oldsmobile, though a bit more prosaic with Holiday, managed to capture the spirit of the thing.

The 1949 model year also saw GM complete its first postwar restyle, issuing redesigned A- and B-bodies in the image of the new-for-1948 C-body Cadillacs and Oldsmobile 98. This mainly involved Chevrolet and Pontiac, both of which fared quite well stylistically. They fared well commercially, too, with record production that went up again for 1950, bolstered by their first hardtops.

But where Chevrolet fielded a single pillarless coupe, the natty Styleline DeLuxe Bel Air, Pontiac proffered no fewer than four Catalinas, named for the romantic island 26 miles off the Southern California shore. (Bel Air referred to that same area, though a little further inland: the exclusive residential district near Beverly Hills.)

DeLuxe and Super trim and six- and eight-cylinder engines accounted for the variations, all in the Chieftain lines composed of strictly notchback styles. Pontiac also offered Streamliner Six and Eight series, each with standard- and DeLuxe-trim fastback sedans and, oddly enough, a wagon.

Interestingly, at least one 1949 Catalina was built. Though strictly for show, it previewed the rakish production roofline with its modestly wrapped, three-element rear window.

Like Chevrolet's, Pontiac's successful 1949 package involved mainly a styling job, its basic engineering being of prewar origin, but it was good enough to last through 1952 with only evolutionary changes.

Learn about those changes on the next page. 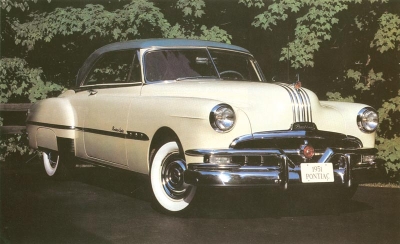 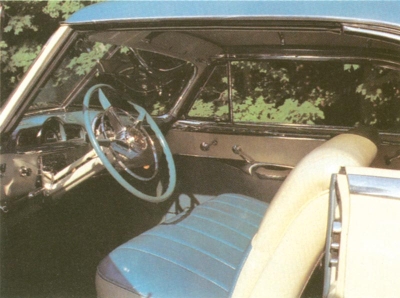 The Pontiac Catalina was upholstered in vinyl and leather.
©2007 Publications International, Ltd.

The 1950, 1951, 1952 Pontiac Catalina was built for luxury, as exemplified by its exotic name, and as such it adopted existing Pontiac engines.