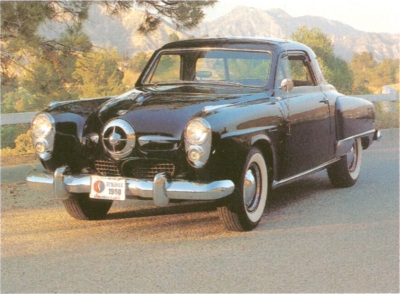 Studebaker entered the 1950s riding high. The one-time wagonmaker had been "first by far with a postwar car," the dramatic and dashing 1947 models that attracted customers in numbers unheard of in South Bend, but the next-generation 1950-1951 Studebaker Commander would be the end of the line for the good times.

Despite labor troubles, material shortages, and the drain of heavy investments for new-model development and new facilities, Studebaker built more than 191,000 cars and trucks in 1947, earning more than $9 million in profits.

The following year, volume swelled to nearly a quarter-million units, profits to a record $19 million. Things looked even better in 1949 as sales jumped 30 percent, to about 305,000 vehicles, and profits leaped above $27.5 million.

But troubles were brewing. Though still popular, Studebaker's "New Look" 1947 styling hadn't changed much, and by 1950 it no longer looked so new. Not so the competition, whose first postwar models had arrived in force, mostly for 1949.

South Bend again hoped to move out front with brand-new styling that year, but it was delayed by internal dissension between the Raymond Loewy consultant team and an in-house faction led by designer Virgil Exner, engineer Roy Cole, and production manager Ralph Vail. Studebaker also needed to respond to Big Three initiatives like high-compression V-8s, automatic transmissions, and "hardtop convertibles."

Ultimately, Exner departed for Chrysler, Cole and Vail were diffused, and engineers continued working overtime on the aforementioned innovations. Meanwhile, Loewy staffer Bob Bourke, who'd helped shaped the 1947, came up with one of history's most bizarre face-lifts: the infamous "bullet nose" 1950-1951 Studebaker. It resulted from a personal directive by the French-born Loewy: "Now, Bob, eet has to look like zee aeroplane."

It did, but the record shows it might have turned out better. And though Studebaker called it the "Next Look," nobody rushed to copy it. Still, the new bullet-nose styling helped Studebaker ride the crest of the postwar seller's market to another volume record: over 343,000 cars. Alas, it would never again do so well.

The broad range of Champion and Commander coupes, sedans, and convertibles offered since 1947 gained four closed Champion Customs; starting at $1,419, they returned Studebaker to the low-price field for the first time since 1939.

A half-point compression boost added five horsepower to the old Champ six; Commander's larger six gained 2 horsepower to 102. As befit its higher station, Commander rode a 120-inch wheelbase, seven inches longer than the Champ, and prices ranged from $1,871 to $2,328 for a Regal DeLuxe convertible.

Spring 1950 brought Studebaker's most important postwar engineering advance yet: "Automatic Drive." A line-wide option developed in concert with Borg-Warner's Detroit Gear Division, it was the only automatic transmission designed and built by an independent other than Packard.

And several features made it one of the best anywhere: no-slip torque-converter; a safety that prevented in-gear starting and damage should reverse be accidentally selected on the move; no-creep operation; and a "hill-holder" that kept the car from rolling backward down an incline. Ford wanted to buy Automatic Drive for its cars, but Studebaker refused to sell -- in retrospect, a serious mistake.

To learn about changes or the 1951 model year, continue to the next page. 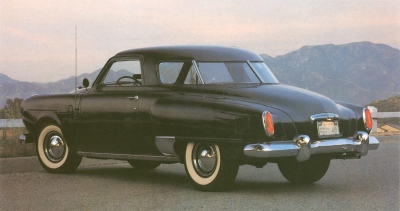 The 1950 look, complete with four-piece wraparound rear window, was mostly carried over into 1951.
©2007 Publications International, Ltd.

The big ammunition for 1951 arrived as the much-needed overhead-valve V-8, exclusive to the 1951 Studebaker Commander. Besides being a fine engine and the first modern V-8 from an independent, it put Studebaker at least three years ahead of Chevrolet/Ford/Plymouth.

Its greater compactness prompted a five-inch cut in Commander wheelbase. Rising production costs dictated putting the Champion on this platform, too, so it inherited the Commander's new-for-1950 center-point steering and coil-over front shocks.

Otherwise, the 1951s were much like the 1950 Studebakers. The "bullet nose" was toned down a bit by painting its large, chrome outer ring; series were renamed and trim reshuffled; Commanders got improved electric wipers (optional on Champions); and prices went up a little. The long-wheelbase Commander Land Cruiser sedan, alone on a four-inch-longer wheelbase, remained the pride of the South Bend fleet at $2,289, although the Commander State convertible outpriced it by a few dollars.

With less weight and nearly 18 percent more horsepower, the V-8 Commander caused a mild sensation. Gushed tester "Uncle Tom" McCahill: "This powerplant transforms the maidenly Studie of recent years into a rip-roaring, hell-for-leather performer that can belt the starch out of practically every other American car. ..."

Still, a Commander won its class in the 1951 Mobilgas Economy Run, averaging 28 mpg with overdrive over 840 miles. Commanders were highly respected cars of their day for long-distance travel, especially the V-8 Land Cruiser. Of course, at just $75 below a Buick Super, they had to be.

Nonetheless, an abbreviated model year and the beginning of government-ordered production cutbacks (due to the Korean conflict) hampered Studebaker output, which dropped to below 269,000 units for 1951, 124,280 of them Commanders.

South Bend was still riding pretty high and some of its most memorable cars lay ahead, but the long, slow slide to oblivion had already begun. Ultimately, being "first by far" would cost Studebaker its life.

To check out 1950-1951 Studebaker Commander specifications, continue to the next page. 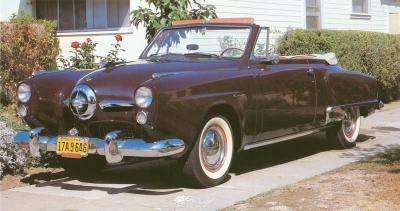 The 1950-1951 Studebaker Commander was known mostly for its bullet nose, but performance was surprisingly pleasant.