The clean-lined, slightly boxy Fords of 1949-1951, such as the 1950-1951 Ford Crestliner, were the cars that saved Ford Motor Company. Henry Ford, Sr., who had resumed managing his company after his son Edsel's untimely death in 1943, was wedded to ideas once great, now grown obsolete. His company staggered under the pressure.

Ford in those days was still a family-owned corporation, and in 1945 the Ford family finally insisted on a change in command. Control passed to a grandson, Henry Ford II. Even before the first Henry passed away in 1947, the recovery effort was underway.

"HF2", whose reign would last 33 years, hired talented, bright new managers, engineers, stylists, and the "Whiz Kids." Notable among the new faces were Robert S. McNamara and Ernest R. Breech. The new management team encouraged ground-up rethinks of the Ford product line. The results emerged in 1949: a handsome new Lincoln, a Mercury cast in its image, and the all-new Ford, which would lay the groundwork for the 1950-1951 Ford Crestliner.

Styling for the 1949 Ford was a competitive exercise between Ford's own designers and several outsiders, including George Walker, later destined to head Dearborn's styling department. One of Walker's employees was young Dick Caleal, a stylist who worked so hard selling his cars that his colleagues nicknamed him "the Persian rug salesman."

Asked to "finalize" a pre-set Walker "package" based on given dimensions, Caleal ran into trouble with the front and rear styling. So he appealed to a friend, Robert E. Bourke. At the time, Bourke was running the Loewy Studios team at Studebaker, which had just finished the famous "bullet-nose" Studebaker. But he liked the "rug salesman" and wanted to help him.

Late night sessions at the Caleal home in Mishawaka, Indiana, found Caleal, Bourke, and Bourke's assistant Bob Koto concocting a smooth clay model with a bullet-nose, not unlike that of the Studebaker. The small scale clay model was actually baked in the kitchen -- so you might affectionately refer to the 1949 Ford as "the car from Dick Caleal's oven."

However one wishes to think of it, the recipe worked. Walker presented the Caleal model to a delighted Ford management team and saw it accepted almost verbatim. And for the 1949 model year, Ford built a whopping 1.1 million vehicles (the most since 1930), out-producing Chevrolet for the first time since 1937 in the process.

All was not roses, however. One spot of trouble ahead was General Motors' new "hardtop convertible," a ragtop-like body with pillarless side windows and steel top. Nobody knew in 1949 whether it would prove a winner or a fluke, but to be on the safe side Ford styling conceived sporty two-door models using existing bodyshells that would come as close as possible to the hardtop idea. Enter the 1950-1951 Ford Crestliner.

To see how the 1950-1951 Ford Crestliner helped Ford compete with General Motors, go to the next page. 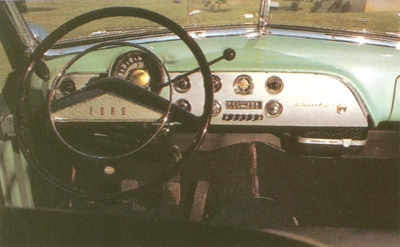 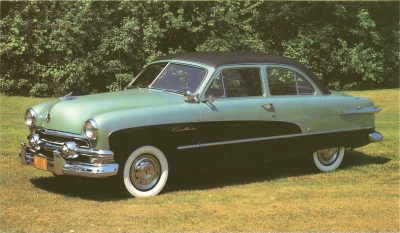 The 1950-1951 Ford Crestliner emerged to compete with the Chevy hardtops of the early 1950s.
©2007 Publications International, Ltd.