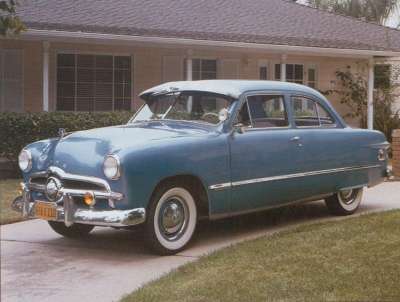 The most popular of the new Fords was the Custom two-door sedan, which drew 433,316 orders.

Even before the design of the production 1949 Ford was approved, Ford chief designer Harold Youngren and the more than 100 new engineers he had hired (mostly from General Motors) were rapidly developing the templates and die models needed to produce the car. As early as March 1947, they were testing mechanical prototypes of the new chassis under reworked 1947 Ford bodies; in July, the first handmade bodies of the 1949 Ford were ready for testing with the new chassis. Although Ford only had 21 months to complete its crash program, more than 1 million miles of preproduction testing was done on the 1949 Ford, both on the test track and in various parts of the United States and Canada.

The new Ford was four inches lower, it had new independent front suspension, a new steering layout, and Hotchkiss rear drive -- something that would have made Henry Ford roll over in his grave. The front seat was six inches wider than in the 1948 model, yet the overall width of the car was reduced by about two inches. By repositioning the body and engine on the chassis, weight on the front end was increased, requiring bigger brakes. Adding an "X" member in the frame increased rigidity by more than 60 percent, even though the overall weight of body and frame were reduced. Ford coined the term "midship ride" for the way the car rode, which was accomplished by moving the seats forward by five inches, allowing the the rear seat to be placed further ahead of the rear axle.

The choice of consultant George Walker's proposal over his was the final humiliation for designer Bob Gregorie. He told Henry Ford II he didn't like Executive Vice President Ernest Breech's committee system and really wanted to work one-on-one with HFII as he had with his father. Ford told him that was impossible and that he had to work with Breech. Gregorie then said if that was the case, he would rather leave as friends. Ford said he would double Gregorie's salary, but he declined the offer.

Ford said he regretted seeing him leave, but gave Gregorie six months to return to his old position, no questions asked. After 11 years as the head of Ford's Design Department, Gregorie's last day was December 15, 1946. A few months later, he moved to Florida and into semiretirement, designing ocean-going boats. He never again designed cars.

Until his death many years later, Walker always claimed that he and his staff were responsible for the quarter-sized theme model that won the first 1949 Ford design competition, and he never disclosed that it actually came from Caleal. (In defense of Walker, the head of most studios often took credit -- or were credited -- for the designs of those who worked under them, and it has only been recently that individual designers began receiving recognition for their work.) According to Caleal, Walker got him a job at Ford by making him promise not to disclose he designed the proposal that won the contest, a promise he said he kept during Walker's lifetime. (Caleal also said that although Walker got him a job as a Ford designer, he never got the $50,000-a-year salary or the position he was promised.)

Walker claimed that as a result of providing the winning design for the 1949 Ford, Breech promised him a long-term design consultancy at Ford, but that did not happen -- at least not right away. When Walker's people finished their full-sized clay model, Breech changed his mind and Walker, designer Joe Oros, and designer Elwood Engel left Ford. Because of Gregorie's departure, Breech felt he had to rebuild Ford's own Design Department. One year later, Walker, Oros, and Engel were asked to return as consultants. In 1955, Walker became the company's vice president for design; Oros and Engel were hired by Ford, too.

Ford brothers (from left) Benson, William, and Henry II enjoy the success of the 1949 Ford.

It cost $72 million and 10 million man-hours to develop the 1949 Ford. On June 18, 1948, at the start of a $10 million extravaganza that brought more people to Ford showrooms than anytime since the introduction of the Model A, the car was introduced at the Waldorf-Astoria Hotel in New York City to huge crowds. Regional showings around the country were held a week later. During the first day they were on sale, orders were taken for more than 100,000 cars, and it was months before Ford was able to catch up with the back orders.

Production came to 1,118,308 cars (more than 100,000 ahead of Chevrolet's 1949 total) and the company made a whopping $177 million profit from the 1949 Ford. Many will disagree about whether it was better than Fords built in previous years, but it was at least as good -- and the third generation of the Ford family to run the company made a huge impact with the first new Ford car produced on its watch, which was a benchmark for the industry.