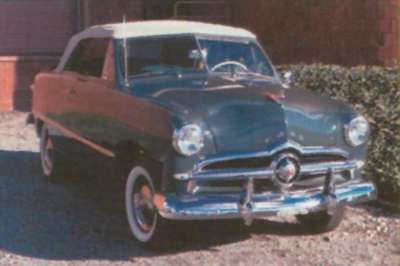 The spinner grille was the most notable feature on the 1949 Ford, even on the sporty convertible.

Ford designer Joe Oros has said it was he who designed the spinner grille on the front end of the full-sized proposal for the 1949 Ford to give it the "distinctive look" Ford execs wanted. (After overcoming objections from engineers who thought it would interfere with cooling, the spinner became the most notable visual feature on the '49 Ford, and many claim credit for it.)

Perhaps some sketches from which Bob Bourke, Bob Koto, and other designers were working had a spinner; Oros said many designers were experimenting with the concept at the time. Likewise, it's possible a spinner grille may even have been roughed in at some point on Dick Caleal's developing model. And Bourke may have intended for the grille bars to rest entirely within the grille cavity.

As time grew short, though, Caleal could have concluded -- and rightly so -- that it was better to have the model completed on time rather than further develop a spinner grille at the risk of being late. If Bourke had not been told the spinner had been removed in the process, he certainly would have assumed the spinner on the production 1949 Ford was a final development of his design.

Oros and partner Elwood Engel also designed the instrument panel on the car to match the spinner grille. In addition, the back doors from rival Bob Gregorie's proposal, with their obvious dogleg over the rear wheel opening, were incorporated in the proposal from consultant George Walker's group, which included Oros and Engel.

Dutifully following package requirements, Caleal's theme model for Walker included a straight rear door cut. In practice, though, it would have meant a tight squeeze when entering or exiting a 1949 Ford. To provide adequate entrance space, Martin Regitko, with his knowledge of body design and package development, would have insisted on this change.

(It was common practice at Ford to create design models that depicted a four-door version on the left side and a two-door on the right. Caleal's mold bears out that he made his 1/4-scale proposal for the 1949 in the opposite configuration. C. Edson Armi's book The Art of American Car Design includes a photograph of a quarter-sized model identified as the Caleal/Bourke/Koto design. However, it shows a left-side four-door with a dogleg in the rear door. Further investigation revealed this to be a picture of one of Gregorie's study models done at Ford Design.)

Although both Walker and Engel claimed the idea, Engel turned the taillights from vertical to horizontal and put windsplits on the rear fenders leading up to the taillights. (Henry Ford II was given credit for this change in a paper on the 1949 Ford presented to the Society of Automotive Engineers.)

The production 1949 Ford did use one element of Bob Gregorie's model: the rear-door dogleg on four-doors.

Gil Spear, who had been a designer at GM and Chrysler before the war, came to Ford in April 1947. His first task there was to refine the clay model Oros and Engel had worked up from the theme model and make it production ready under the supervision of George Snyder. (Snyder was another newcomer to Ford. He was formerly head of GM's Oldsmobile design studio and was soon appointed to lead Ford's Design Department.)

According to Spear, the full-sized clay model was amateurish, and he and Snyder had to entirely redo it to make it ready for production. Among other things, Spear tried to include a "head-up" display for the speedometer, with lighted numerals projecting the speed on the windshield, a technology borrowed from World War II aircraft. But "fear of the unknown" and cost dictated a conventional speedometer. One body style that didn't make it into production was a fastback sedan. As Spear remembered it, a fastback was the idea of newly hired chief body engineer John Oswald, but for reasons that were probably tied more to an anticipated lack of sales, the fastback never saw production.