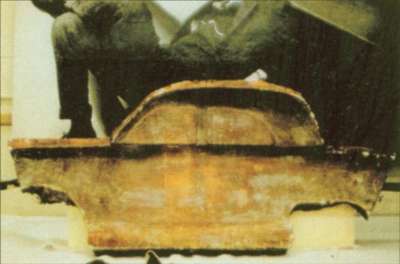 Surviving pieces of Richard Caleal's mold came out of storage at the Henry Ford Museum in 1995.

When design consultant George Walker was able to provide Ford with the theme it accepted for its 1949 car, Walker stuck to a promise he had made beforehand and recommended Richard Caleal -- in whose kitchen the winning design was created -- for a design position with the company. Having accepted, Caleal moved from Indiana to Detroit with his family in the fall of 1946. Among their possessions was the plaster 1949 Ford theme model mold, which found a home in the designer's garage.

It remained with Caleal until 1986, when he decided that the proper thing to do would be to donate the multipiece mold to the Henry Ford Museum and Greenfield Village in Dearborn.

Caleal's daughter, Mary G. Stephenson (the "G" stands for Geo, short for George, as in George Walker; she was born during the 1949 Ford development period), hoped to publish an article telling her father's side of his involvement in the design of the 1949 Ford theme model. She requested -- and the museum agreed -- that no work would be done on the mold until she could have her article published.

It came as a great surprise to automotive history enthusiasts when David Crippen, then curator of the Henry Ford Museum, first mentioned the molds and their transfer to the museum at the time. This was a valuable historical find and presented the opportunity to make a new cast of the design created in Caleal's home since the original 1/4-scale model no longer existed. A new casting would be able to shed some light on some of the disputes surrounding the origins of the design. However, the museum was intent on honoring Stephenson's request, and a reproduction had to wait.

When an article did appear in the June 1993 issue of Collectible Automobile®, the museum was released from its promise. But in the interim, the mold pieces had been moved and couldn't be immediately located. When they finally came out of storage in August 1995, Robert Kirkpatrick and Fred Hoadley, both retired Ford modelmakers, spent many hours cleaning and repairing the mold in the museum's conservation area. According to Hoadley, the surface of the mold pieces was good, but they required some reinforcement. Only four of the original five pieces turned up, however. Hoadley speculates that the rear piece may have been broken beyond repair and was discarded.

Hoadley's son, Tim, photographed the mold pieces when they were first brought out of storage, and again after the parts had been cleaned and shellacked. By late September, the mold was ready for casting the new model, which was made of Ultracal, a hard gypsum cement more durable than the plaster from which the original cast had been made in 1946.

The mold (which remains in the museum's possession) and the rough cast lent credence to the claims of Caleal and former Ford design executive Joe Oros that the concept, as originally modeled, did not include the spinner-nose grille for which the production car became readily identifiable. However, as of the autumn of 2000, the new cast remained unfinished.

The front piece of Caleal's mold shows no apparent sign of a spinner grille.

Fred Hoadley began work on a book, Automobile Design Techniques and Design Modeling (since published), which diverted his attention from the cast. Among the tasks remaining were to cut scale wheels from wood and to complete the rear section using archival photos of the first full-size clay workup of the Caleal theme model for reference. Hoadley hoped to complete the cast over the winter of 2000-2001.

Oros has maintained that Caleal's quarter-sized model had no spinner in the grille. Having been involved in the process of turning the theme model into a life-size clay, he said the full-size work-up was an exact reproduction except for minor package corrections. Studio photographs of the large clay show the grille without a spinner.

Caleal, too, denied there was a spinner nose on the model he turned in to George Walker. However, Caleal was holding a powerful bit of evidence to back his contention. After Bob Koto, a Studebaker designer who helped Caleal, pulled the mold from the cast of the theme model, Caleal stored the mold pieces in his garage. He kept them for 40 years before donating them to the Henry Ford Museum and Greenfield Village in Dearborn, Michigan. In 1995, the four surviving pieces of the mold were taken out of storage and cleaned up, and a new casting was eventually made.

Close examination of the mold piece taken from the front of Caleal's model shows no arch in the center of the grille frame that would rise above a spinner. Also, the outline of the horizontal grille bar is clearly seen extending beyond the grille opening. Both of these details compare favorably with the first full-size build-up of the Caleal model made by the Walker team.